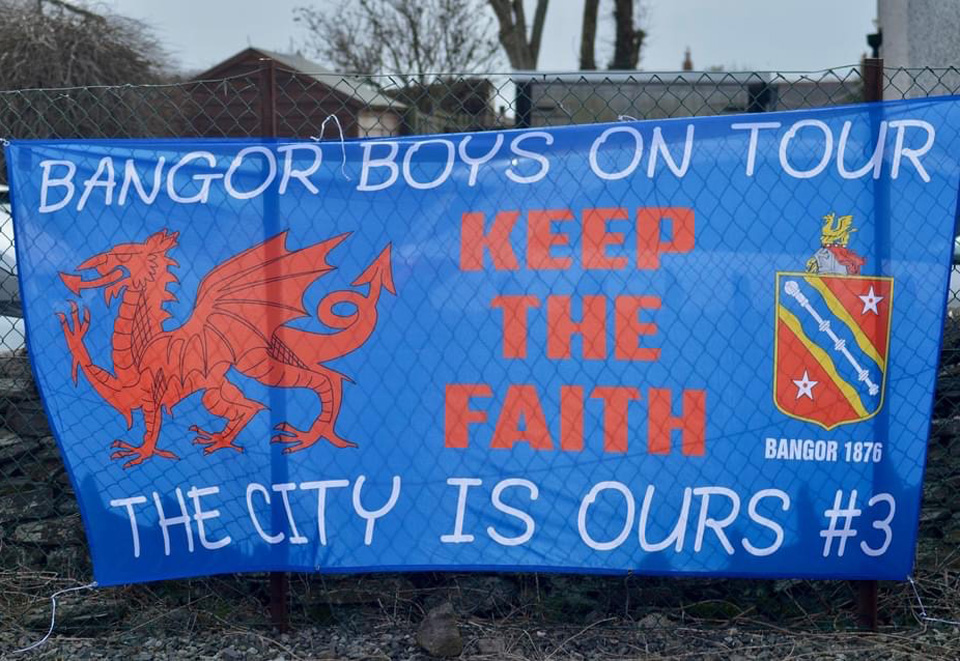 On a recent Friday night, Bangor 1876 beat Llanrug in the North Wales Coast Premier League West. More than three hundred spectators watched the game in the fourth tier of Welsh football. A realistic average for the league might be nearer thirty.

One week earlier a famous name ‘withdrew’ from the Cymru North league (the second tier), or to put it more accurately, faced up to their inevitable expulsion. That name, for it had long ceased to possess any of the credentials of a credible ‘club’, was Bangor City. With monstrous debts accrued over recent years as a result of let’s say ‘dubious business practice’, including more than fifty thousand pounds owed to players, the football authorities had (finally) sent the fat lady onto the stage.

The media, predictably, invoked a round of hand-wringing, inviting figures from the past to bemoan the fate of the great old name. There’s something terribly wrong there, they said; it’s a tragedy for the city, they said; it should never have been allowed to happen, they said. The truth is that lots of people had already said those things, except they’d said them a few years before, and not only said them, but acted on them. That was when Bangor City became a ‘name’ and Bangor 1876 became a club.

What happened? Well, in 2016, Bangor City was infiltrated by a group whose previous football involvement could be summed up with the words Barrow FC and Chester City FC. An Internet search will quickly fill in the background to those grim episodes. There has been much talk about how this particular Trojan Horse was wheeled through the gates, but the truth is, there wasn’t much to stop it. What’s more sobering is that there still isn’t much in the way of regulation by the FAW a to stop it happening again. And again. ‘The old board’ receives as much in the way of opprobrium for this fall from grace as the actual architects of the fall, but it only took one decision, innocent or otherwise, and the die was cast.

Within a few seasons, the same pattern established at those other clubs was well and truly drawn at Nantporth. It was a circus, and it wasn’t one that the casual fan in the High Street could do much to challenge. Relegation, financial irregularities (to put it mildly), auditors refusing to sign off accounts – this was the world of the ‘consortium’.

Watching in horror as the world of football in Bangor spun wildly off its axis were the fans. The fans who had spent years and thousands following their club. Their club. From the pessimists in the stands to the eternal faith-keeping optimists of the Farrar End; from the three times a season glory-hunters to the dyed in the blue, every game, rain or shine, home and away brigade; Wembley to Scarborough; Copenhagen to Reykjavik; Caersws to Carmarthen. Yes they harboured doubts about the new stadium at Nantporth – some said it would never be the same – but nobody had banked on this particular consortium…

Bangor 1876 was formed by the Bangor City FC Supporters Association. Let that sink in a moment. Actually, let’s say it again for the removal of any misunderstanding. Bangor 1876 was formed following a vote by the membership of the Bangor City FC Supporters Association. That is to say that the fans of one of the greatest non-league clubs in Welsh football history, raised their hands in a public meeting and voted to rekindle the spirit of Bangor football in the only way they could see possible. They felt, with very few exceptions, that without such drastic action, there was a very real danger that senior football could disappear from the city. That appeared to be the direction of travel at Nantporth. And they were right. No doubt. Fact. They were right.

When the consortium ‘sold’ Bangor City to its current ‘owner’, the events that followed were little short of bizarre, but whatever was going on at Nantporth, things at Sambenedettese, a third tier Italian Club were a useful barometer as to the probable finale of this particular voyage. For the record, even now, the captain of the ghost ship is still promising the delivery of great riches. It remains to be seen whether his cargo of investment will sail into port in September. In a recent interview with local media in Bangor, he made more promises. The cold facts are that at Companies House, the accounts remain long overdue…

A club is the fans. When around three hundred and fifty people attend a fourth tier game at Treborth (and just as many attended games in tier five) it’s not just an affirmation of where the faith is kept, but a clear demonstration that Bangor 1876 is the sustainable and community-facing future of senior football in the city. There’s a way to go before we double and treble that attendance, but a combination of hard graft and determination on the part of of players, staff, board and fans, is taking us in the right direction. Our women’s team is thriving as well, and boys and girls from Bangor are benefitting from being part of the 1876 family; learning the game, having fun. It’s about developing football as a strong focus for the community, and it’s for everyone.

A Tale of Two Cities no longer.