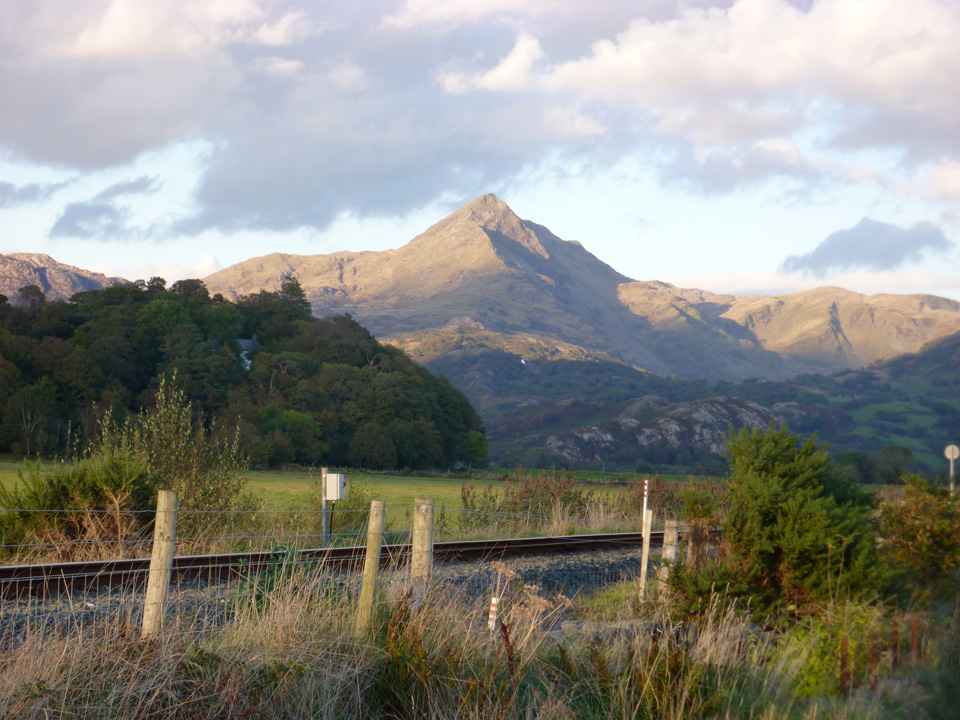 We parked outside Bargain Booze and went to Browsers bookshop. We needed a couple of bits from Wilkos as well. There, how’s that for brand placement? On the way back to Croesor we drove round past Y Llong and back onto the strip (Port has a strip) next to the Factory Shop. (Contact me for ad rates… ) we were going to Tesco, so we turned left (Mr Tesco… ring me… ). It was quarter past four. I looked over at Cnicht. The light was fading, so scale was lost. Cnicht must have drawn the eye of every adventurous soul who ever looked in its direction. Before the Cob, before the tat-shops and around the time that the first ship set sail through the tricky channels with a load of slate, I wonder if some long-coated, mutton-chopped Victorian alpiniste ever actually looked down Chapel Street and remarked “By Jove, see that there – looks just like the bloody Matterhorn” before he gave a bent-backed ‘guide’ from Beddgelert two bob to show him up Snowdon. 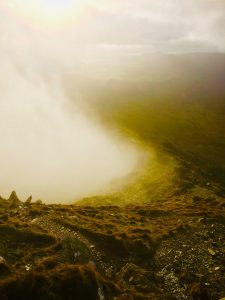 Less than an hour before, I’d looked in the opposite direction. The reclaimed Glaslyn plain flashed green in the lowering sun, in and out of focus, as the steam from Cwm Croesor’s boiling pan wisped over the edge of the ridge. I’d looked down on Porthmadog and pictured visitors, arms linked, enjoying unseasonably mild temperatures, wearing pristine (and very expensive) outdoor clothing and brand new mountain boots – boots destined for a life scuffed only by the kerbstones of Abersoch, Betws y Coed and the slate waste car parks of destination woollen mills.

Five past one. There are three hours of daylight left. The first fifty paces are as steep as the last fifty. If you’re out of breath at the top of the lane in Croesor, you might be better off buying a breathable shell coat and driving on Black Rock Sands. Mind you, I’ve just had a massive scran and although there’s no lactic acid, there’s a touch of fried potato in the upper tract. From the summit of the lane, you drop down a bit before you leave the tarmac and scrabble up a loose track in the woods. You might never have seen a wood like this. It’s completely camouflaged by moss. Trunks, branches, the walls that stop it strolling off down to Llanfrothen like some Tolkienesque army, the lot. Moss. Everywhere. Thinking about it – if you’ve got your ninety quid coat and alpine boots but you’ve got knees like an arthritic heron, park in Croesor car park and just go and see that wood. You won’t believe it. 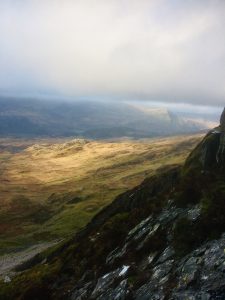 At the top of the second incline, a signpost points you onto the mountain. Ignore it and you would descend a seldom-walked, lonely, boggy pathway towards Beddgelert, so instead, follow the arrow to Cnicht. The Gelert track is a gem for another day. I pick my way up the puddled track, rising forgivingly by degrees, at the edge of a wild hollow that would do justice to a romantically named epic poem. Look across the sunken moor at what I’ve read is a ‘dolerite intrusion’ – it’s a grand place to go on a summer’s evening when the rock is dry and the moor is more moor and less sump. Perhaps the poem would be called El Dolor Del Amor. Close but not quite a Cuban cigar… The track is wide, wet and gradual and the slope on your right keeps the view to the south out of sight until just beyond a stile, after a little boggy corner, the Moelwyns are revealed with some drama. All the while Cnicht has been looking like it’s getting further away. The wide track peters out here but the way is clear. Just before the works starts, the paths rejoin to traverse an incongruous section of scree – why on earth it’s here I’m not sure but it makes for a mountainy feeling and scuffs the boot-leather in an authentic fashion.

It’s about 1.40 and the wind has picked up. The head of Cwm Croesor is dark, the top of Moelwyn Mawr is obscured and a moistening of the air is palpable. The hood goes up and the head goes down. Ten minutes of slog later and I’m leaning on the outcrop that sits below the summit. Go right here unless you favour an interesting, crabbing scramble on the left. The cloud has now sorted itself out and made a decision to line the valley floor and throw up the odd reminder to keep me honest. I haul myself through the grooves and around the blocks until, in no time, I’m on top. I love this place. A young couple have arrived at the same time, approaching from Bwlch y Battel a shade ahead of me and ask if I’ll take their picture. Job done. They elect a backdrop of misty mystery – Moelwyn Mawr might have appeared as an apparition in the picture but the screen is too small to know at the time. I hope it worked. The swirl is in equal measures frustrating and intriguing. I’ve stood on this spot so many times and never been less than captivated by the view. Mostly, the least I’ve seen has been Glaslyn green and that’s the case today but on other days, it’s taken a good half an hour to process the awe. It works the other way round as well. It’s funny, for a modest peak that only just pokes its head above 2000 feet, I always seem to notice it. I sat on top of Lliwedd one morning at about 8am and sought out side-on Cnicht. It was just one amongst endless southern skylines as I squinted into the morning sun but I picked it and knew exactly what it would feel like to be there. 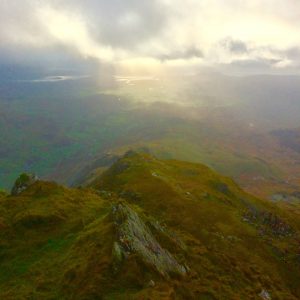 Time to make a move. Today, there’s not time to extend proceedings. A fine summer’s evening would demand a jaunt along the summit ridge and around the head of Cwm Croesor with an eye on Moelwyn Mawr. The shops in Port close at five and we need supplies so I plunge back down the way I came. Earlier four people and a dog crossed the summit and I catch them up as they manhandle the nervous young Labrador over one of the awkward steps. The dog is lowered over the rocks and all is well. He won’t be joining the Aberglaslyn Mountain Rescue team anytime soon. As I cross the patch of random scree for the second time, my eye is drawn to a ruined stone hut down on my right. That would be a place for an artist to make a panad and contemplate. I splash my way down the track. The moist, mossed wood (sorry) is a now possessed of a remarkable luminosity as the sun throws a few token gold rays in its general direction. It’s been a couple of hours – pipes opened, wonders appraised. Cnicht never lets you down.

So here we are. We’ve browsed, stocked up and we’re dawdling along towards Llanfrothen, next to the Highland Railway. The light has failed down here but Cnicht’s outline is still etched against a cold, clear, half-dark winter sky. Shall we go to The Ring for a drink? No better place to sit by the fire and grow the tall tale. Iechyd da…