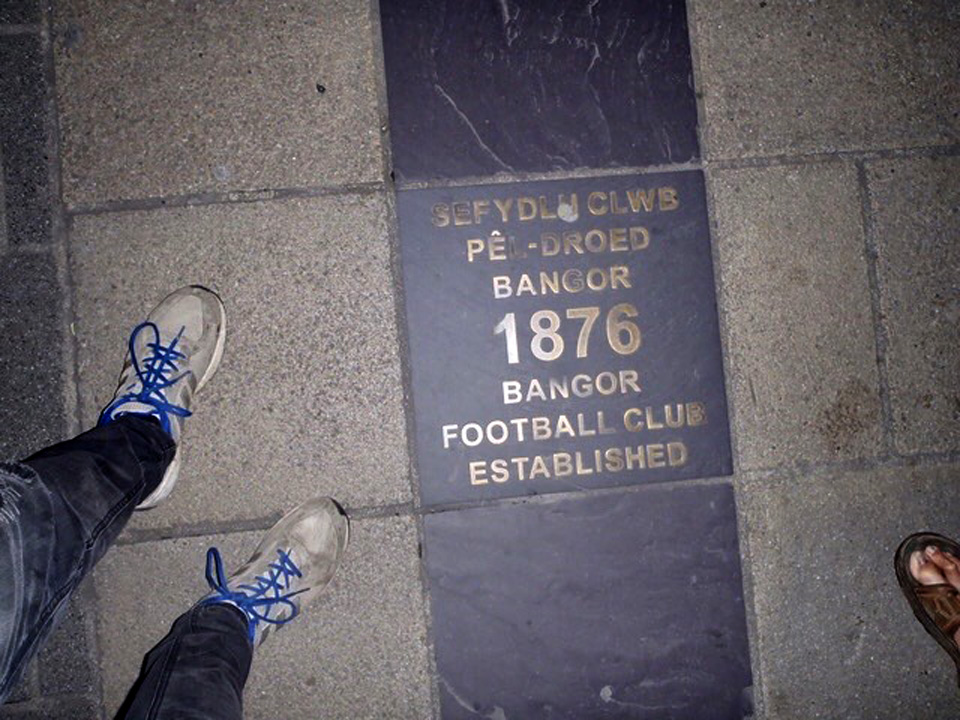 “They paved paradise, they put up a parking lot…” wrote Joni Mitchell.

“Don’t it always seem to go, that you don’t know what you’ve got till it’s gone…” she sang.

But we knew all along.

The coach pulls out of the station car park and passes the top of Farrar Road.

“..and we’re on our way, no we can’t turn back” sang Jim Morrison

And in another song,

“The time to hesitate is through, no time to wallow in the mire…”

Today will see the restoration of Bangor football culture into the hands and hearts of its citizens.

Bold claim? No. Come with us and see.

They built their own ground and they sing about it. They’re proud of it at FC United of Manchester and so they should be. As the buses pull into the car park of Broadhurst Park, the collective buzz on the Crankies Coach is palpable. For years, this feeling has been sucked away by the leeches that attached themselves to our club, our blue blood drained to the point of despair until some good people took a few soundings, then some tentative steps and then appropriately, in this year of moon-landing commemoration, a giant leap. We haven’t built our own ground yet – we’ve been a football club for one month and one day – but who knows what we’ll do. We’ve been a football tribe for much, much longer. The past belongs to generations of Citizens stretching back to 1876 – the future belongs to us. We are Bangor. The city is ours.

That’s why we’re here. These Reds are not just generous of spirit, they’ve gone out of their way to make us welcome, to help show us the way, to point us in the right direction and say “yes, what you’re doing is right and yes you CAN succeed.” There are hundreds of us and we consume conspicuously, returning the kindness of their invitation by laying siege to the bars. We drink the guest ales dry. Rude not to. There’s a band on under the stand, there are pies and loud greetings and the chants rise and rise higher and echo in the inverted terrace-rafters of this special space. The singer is draped in a blue flag and he swaggers as the rhythm section syncopates urgent Madchester beats. The band do their own stuff. Good. So they should. Everything else here is original – why not the band?

It’s hard not to smile.

Do you believe this?

At five to three it’s hard not to cry.

This is the rediscovery of emotional ties. For years, many of us have railed at the tearing-away and the enforced lowering of our standards but now they are raised again. The teams take to the field and everyone in this impressive stadium cares. The songs pour out and the FC United fans take the prompts and ramp up the noise. The atmosphere is spine-tingling. There are 800 people here – that’s all – it sounds like thousands.

On and off the pitch we are overwhelmed. United score at will and our newly thrown-together side is outclassed but they stick at it, closing down where they can, trying to play, trying to keep their heads above the rising red tide. It is to our hosts’ great credit that they give no quarter. They batter us with keen, quick, ruthless efficiency. They will have much harder days than this but the way to respect an opponent is stay relentlessly focused on winning. They don’t showboat, they don’t show off, they just keep passing it and they just keep scoring.

89 minutes have gone and we are a dozen goals down. For some of us, standing here behind this goal, humiliating heavy defeats are not a new experience but in this festival of goals-against, we don’t feel disgraced – instead, we are grateful to ‘feel’ once again and we now know for certain that these tottering first steps will take us out of the darkness. The noise keeps on. Ragged Welsh throats beseech the great redeemer, any redeemer and then from 100 yards away the United fans join in. “We love you Bangor, we do…”

Benn Lundstram will score many goals – he has already scored many goals. Some of the goals he will score in the future will win games, some will be equalisers that salvage a point, some will be tap-ins, he will score hat-tricks where the second goal goes in off the back of his head, toe-pokes in the mud when the goal line has disappeared under a west Gwynedd deluge, curlers, drilled-into-the-corner-technical-masterpieces and ones where he gives the keeper the eye and goes the other way.

Whatever young Benn does during the rest of his promising career, whatever heights he scales, whatever path he chooses, his place in 143 years of football history is assured…

The game might be up but it’s not over. The ball is in the rare vicinity of United’s penalty area and their defenders are working hard to clear it. Once, twice, they stab it away but it finds its way, by equal measures of chance and design, to the feet of the kid who played for Pen Phoenix. I played for Pen Phoenix. It’s not a scuff so much as one where the coach would kill you if you hit it wide. Make the goalie work. It’s a weak effort but the time it takes to reach the young replacement keeper means that he’s caught in two minds. He’s up on his toes, set to dive but it’s straight at him and his adjustment is awkward. He stoops to a half-crouch and the ball, willed by every human being in Broadhurst Park save for him and his back four, slips through his gloves and passes slowly between his long stick-legs, across the line and into the goal.

The energy that is released into the Moston ether is an unstoppable roar that flies west. Outside The Globe, a bloke has gone out for a fag; a bus driver opens the door for a fare in Maes G; a family walks the dog on the Pier and a hippy meditates on Roman Camp. They all hear it.

In the bar, in the company of our new and esteemed friends, we drink to a future that will take us to the outposts of The Gwynedd League. Will Bethesda be so different from Bala? I doubt it. Once you understand what football means to a community, you’ve cracked it. Some never will and they are condemned to live in a grim twilight of ducking, diving and discord.

There are no commercial certainties for Bangor 1876, just hard yards and hope. The people who are doing the hard yards are the ones who are offering that glimpse of hope. The rest of it is up to the tribe and the lads who wear the shirt.

It’s half past ten. Three old stagers sit in the front window of what used to be Boots, looking at Boots, which used to be Woolworths, sharing beer and reflecting on today and almost 150 years of combined membership of the Bangor football fraternity. It’s quiet. We drink Spanish beer. Amongst the black print on the designer pint-glasses is a number…