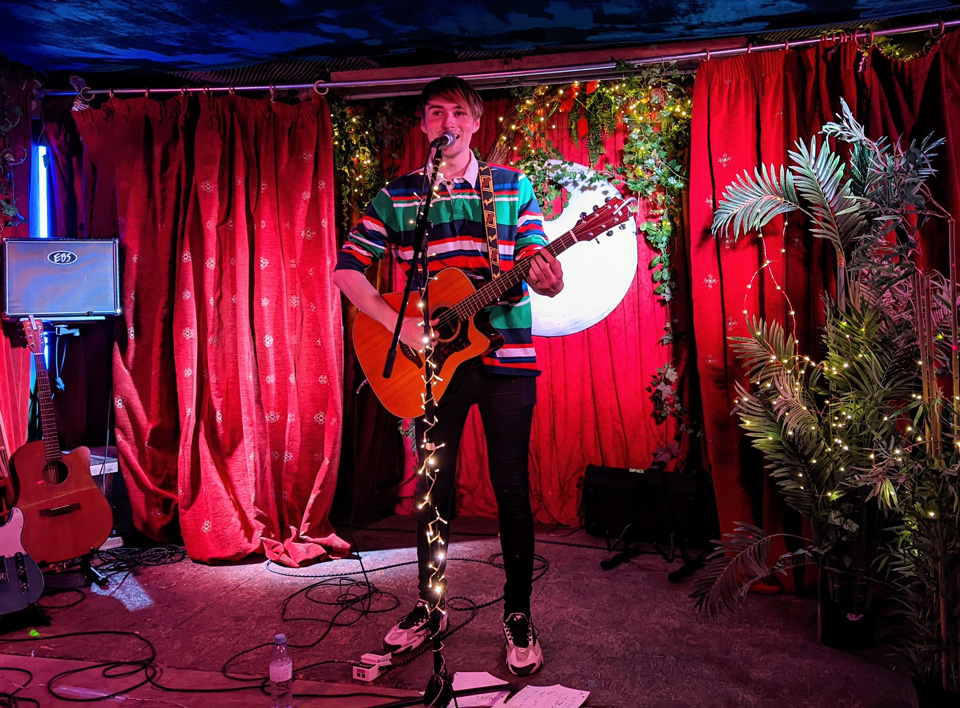 I liked the Folklore place. There was a cat on a pouffe, low-hanging houseplants and proper German lager. As El said (and Charlton Heston might’ve – anyone got that?), it’s GERMAN German lager. It’s got that “ooofff, that’s nice”. I didn’t ask how much it cost. Kids buying me drinks. Ah go on then. I’ll sit here on this distressed stool with spider plant hair, wishing I was your age.

The toilet was interesting. I think it’s temporary. Lovely. It’s a plywood box and you get to have a sliding doors moment. Rustic. Clean as whistle.

Tal went on first. Looked at home. Good engineer too. The room filled up straight away, fair play. Confident and he definitely thought about it. And then, after a few songs went by, he played ‘Rise’. His brother’s up the front. His brother was on the sofa in his jamas when I wrote that song before ‘him-up-there’ was born. It’s a moment in my life. It will be part of my folklore.

I walked to Liverpool Street after catching some of the third act, and left them all there; in Folklore.

The tube was quiet. At Baker Street I discussed with myself the benefit of one more beer, and the German lager chipped in and said yes. I sat outside The Globe in the hubbub, watching the satchelled-takeaways whizz and weave their way to wherever, and took a few swigs before sauntering to Marylebone.

Saunderton was as quiet as any dormitory Home Counties housing development could be. On Smalldean Lane, I sang the middle-eight out loud. Foxes retreated, badgers trundled away; silent horses wondered about the veery bloke with a head torch.

Tal was on with two other artists. They were called Sara and Jessie Faulkner. The three of them presented engaging and entertaining performances of high quality songwriting – theirs, I meant. I hope they dream of great things; I hope they are inspired, and I hope they believe .

And when I woke up?

I’m not done yet, but there’s definitely another one on the block…