There are all sorts of ways to get onto Glyder Fach and Glyder Fawr. Classics like Y Gribin and the Bristly Ridge, slogs like the one from Bwlch Tryfan or Llyn y Cwn and interesting ones like Cwm Cneifion. This one is none of them. This route is so bog-standard that every aficionado and purist will spit in their thrice-roasted, hand-ground, fair-trade Americano and pompously pronounce disgust and disbelief. Why? WHY? would anyone go that way? But remember these stories are the three chord works of the mountain punk and in my book there is room for every expression… not just the masterpieces.

As usual, it’s dark. The odd set of van headlights traces its way up Dyffryn Mymbyr or Nant Gwynant and rushes past heading for Beddgelert or Capel Curig. As usual it’s cold. Fingers numb as I put on my boots and it’s tempting to put on a coat but I resist the temptation. It’s going to be needed later. The faintest glow colours the sky in the east, occasional lonely bleats float on the steady easterly breeze. This is a lay-by in Penygwryd and the Miner’s track up to the moor by Llyn Caseg is easy. On a summer’s day, if you drive up Nant Gwynant, you can see it, clear as anything. 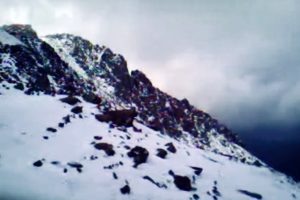 I set off. I’m bloody freezing and part of me is regretting the last beer… last night. The glow is thinning out the darkness and I switch off the torch as I bear right away from the path to Cwmffynon and strike up the unmissable diagonal that begins in the slosh and soon steps up onto heather-dry ground. Me and the half-hearted sun rise together and by the time I reach the snowline, it is properly light, albeit that the sky is accommodating seven different kinds of clouds and the wind can’t decide in which direction it wishes to blow. Some days the easy way onto the Glyderau is the only way… unless you want to skate around, wondering when to put on your crampons, or go the full nine yards with your alpine kit and your ten o clock start.

Llyn Caseg-Fraith is over there but I’ve seen it plenty of times, so I’ll pass by. Intermittent cloud occasionally obscures things but never settles and a half-left bearing, once I reach the plateau, will do the trick. The snow is mostly old, the remnants of a heavy fall a few weeks ago but recent dustings sit on the surface and sap the energy. As I begin to climb again, above Cwm Tryfan, I pass tents. Mad bastards. They’re still asleep. The loose top is picked up by the wind and every so often it stings my face. In fairly short order I’m looking directly across at the summit of spectacularly-frozen Tryfan and I’m picking my way carefully over the last couple of rock terraces. 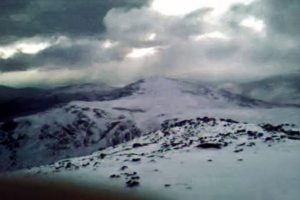 Now it IS cold. Now, I squat down in the lee of the giant summit crown and put on my coat. I’ve stopped and the heat I’ve generated on my steady plod has already reached the Irish Sea. I remove my gloves to rummage for chocolate and it hurts. No photos here. The Russian hat is strapped tightly, the chinstrap inhibiting the chewing of the sugary pick-me-up. Castell y Gwynt appears and disappears in the near distance, fleeting glimpses of green at the foot of Nant Francon contrast with the iced-grey cleft in which I’m propped and plans to worry my way to Glyder Fawr are shelved. In the moment, in the conditions, there is a realisation that the elements are always in charge. Always. The wind is now roaring through the hallowed stones, whipping up crystals of ice and in the short time I’ve contemplated this solitary thrill, any remote complacency that might have seduced me is flattened. It’s time to go down.

As I pass the tents, the occupants are emerging. Zipped open, the flaps smack on the skins like gunshots. The storm is nowhere near the boil but the horizontal strafings narrow my eyes and I wish I had some goggles. Feigning nonchalance I bid them good morning. Feigning nonchalance they reciprocate, as though we had just bought a paper and a take-away coffee. As the morning sun rose with my ascent, so the gathering hooley and lowering cloud-base follow me down. As the middle ground whites-out, I pick out the outcrop that marks the top of the last leg and plough on. 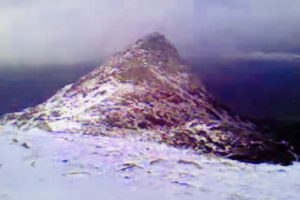 Halfway down that easy track, snowless and gentle-grey, normal service is resumed. I sit down for a minute and allow my gaze to wander to the traffic on the road and the Pen y Gwryd Hotel. The sleety rain falls in a moderate breeze. I loosen the chinstrap on the Russian hat and open my coat. I’m warm again. At the car, I throw everything into the boot and drive back toward Pen Llyn in shorts, a fresh t-shirt and trainers, my face as hot as if I’d walked the Grand Canyon in high summer. By the time I get to Beddgelert, there is nothing to see, save for steamy windows, wipers and a dray lorry unloading its cargo. It’s 11.30am.

Yes indeed, there are all sorts of ways onto Glyder Fach and yes indeed, The Bristly Ridge ticks the boxes. Today, for the ten o’clock virtuoso, that steepling dragon’s back of a glorious scramble, iced to perfection, would have seen him off with no chance. Sometimes it’s horses for courses, sometimes the prize is awarded to those who keep it simple. The top of Glyder Fach is the kind of place that every human should experience at least once in their lifetime but if that one time is when it’s about to be consumed by every force nature can muster, there’s always the Miner’s track.