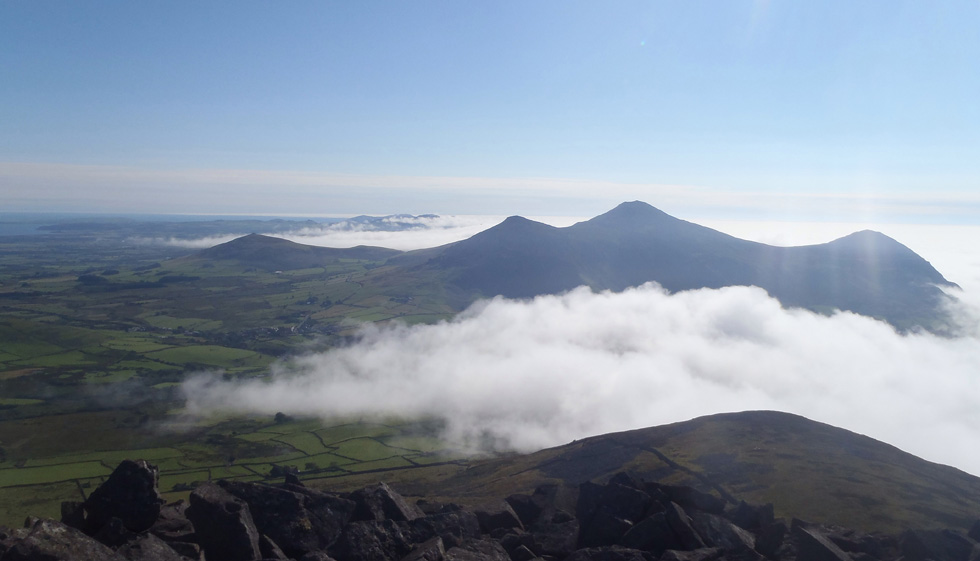 “Never heard of it.” I can hear you now.

“Where? Between Clynnog and Llanaelhaiarn on the A499? Never heard of them either.”

I promise you. It’ll be worth it.

Ok, don’t go there then. It’s 2.30pm in August. Go to the top of the Llanberis Pass and spend the afternoon trying to find a parking space… or Ogwen… You wanted to go to Caernarfon on a rainy day… go to the castle… but now it’s cleared up. There’s a lot of cloud hanging there on the tops but look West, it’s like the promised land. Your boots are in the boot… all your gear… pick up a sarnie and a bottle of water, you’ll be at the bottom by 3.

Fine. It’ll be worth it. Promise.

The Clynnog Hills are ace. No-one visits them… well, they do but I’ve never seen anyone on them. Charlie and I first went up Gyrn Goch when he was about 8. You just park in the village of, yes, Gyrn Goch, locate the path up through the obvious woodland that is quite magical (with waterfall and all-sorts) break out of the woods onto open hillside and flog your way upwards until you can’t go any further. There, I’ve even thrown in a freebie for you. Perhaps just file that away. Gyrn Goch is almost as good as Gyrn Ddu but Gyrn Ddu gets in the way of Gyrn Goch when you’re enjoying one of the most stupendous views in Britain, whereas Gyrn Goch doesn’t get in the way of Gyrn Ddu. Clear? So we’ll stick with Gyrn Ddu and you can have Gyrn Goch for nothing. Do it on another day when you’ve been to Aberdaron for a swim and you remember what I said about the magical woods and the waterfall…

The A499 sweeps past Clynnogfawr nowadays but it still goes through Gyrn Goch. Up and out of the village it goes until it reaches a little settlement of houses just before the Trefor turn-off. The old road runs parallel to the new one, somturn off onto that old road pass the houses and drive until the road narrows where a deliberate shoulder is introduced. Park here and locate the public footpath that goes up the lane near a spot height of 59m. A little way up the lane turn off left across the field, into a little wood and out again. The path is clearly marked on the map, if a little faint on the ground. Once out of the trees the path is distinct and zig-zags up some brackeny slopes towards some falling-down quarry buildings.

After a few hundred feet the zig-zags pass close to a derelict building. If only I owned this building, you might think for a second, I could sit outside the front with that view and drink tea. Yes it would be a bit of a pull with the shopping but what a place from which to watch the sea change colour, watch the storms roll in and the sea-mists rise. But I’m daydreaming. That’s part one done.

Soon the track crosses over the shoulder of Moel Pen Llechog on the right and we lose the sea and become travellers in a different landscape. This is all moorland and drystone walls; distant hills and loneliness. On arrival at the ‘desolate farmhouse’ – Charlie and I tend to name things for posterity – it’s time to put in a bit of leg work and a wall that rises toward the left skyline and then angles towards Gyrn Ddu’s summit, provides a pretty obvious route. Sticking close to the wall and gaining height rapidly, the ‘desolate farmhouse’ and imagined drovers’ ghosts are left behind and we enter another distinct phase of things. We now appear, in spite of our friend the wall, to be on a mountain. How did that happen? Looking up from carefully placed feet it becomes apparent that we’re quite high up. How did that happen? Well consider this – by the time we reach the summit of Gyrn Ddu we’ll have climbed 1700 feet – a bit like the 1700 feet from Ogwen to the summit of Foel Goch. So yes it’s only 1700 feet high but by the time we hit the top we’ll have done every foot. Good job you warmed up climbing all those towers in Caernarfon Castle in the morning. With every step of the way, the ground to the south falls away, sweeping down onto the beaches of Pen Llyn. The higher we go, the more the Llyn Peninsula takes shape. After the wall has bent round and risen to a high shoulder it’s time to cut up the last couple of hundred feet to the top.

The summit of Gyrn Ddu is a truly marvellous place. It begs your camera to linger, begs you to take ten, fifteen more shots. Pen Llyn, Sir Fôn and the seemingly endless ramparts of Eryri take away what little breath you had left. Western Wales is there for you to gorge yourself on. A ferry leaves Holyhead, dogs are walked on Llanddwyn beach, jet skis zoom near Pwllheli and a fishing boat slips along by Trefor. A mist rises from the cold sea to the west, creeping between Tre Ceiri and our new castle but it doesn’t reach us here.

If we wanted we could carry on North West, down and up to Gyrn Goch and then we might plummet to the magic wood and tramp the main road back to the car but sometimes, facing everything that was at your back on the way up offers a whole new picture. So we’ll go back along the wall (how long did it take to build that wall?) past the ‘desolate farmhouse’ (must be wild there in winter) onto the wide track until we drop back to the bracken and the echoes of the long-closed quarries. The zig and zag back to civilisation is easy on the legs, a glance over the shoulder at the right time and the summit of Gyrn Ddu towers above. We’ve been there. It was great.