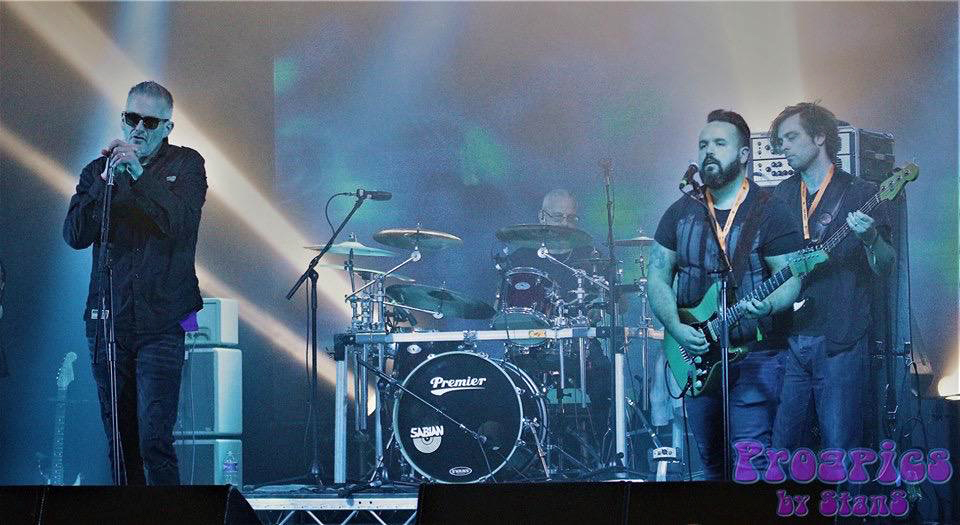 What’s going through my mind? Things I don’t expect. There is no water in the dressing room but there are dummy heads, for wigs, for cabaret shows, for holidaymakers. The backstage is always the same – always different. What time is it? No-one would know. Goldray are grooving nicely. Is it too early for a beer? Or too late? They finish their set and return, all sequins and perspiration, to the corridor and into their rabbit hole. Nice people. One of them was in Reef and something reminds me that Reef used to play secret gigs at The Wheatsheaf in Leighton Buzzard… or maybe that’s not true and I should have checked. None of our gigs there were secret. Hot, mad and banging but never secret. But I think it’s right and I should have asked Kenwyn House but I didn’t get a chance, because the changeover is scheduled for ten minutes and the tell-tale, inbetween-the-bands murmur is rising above the piped music and I need to find my shades.

The others always go on before me. They plug in and the guitarists check their tuning and make sure it’s all working. I stand there in the wings… again. It’s a funny forty five seconds. Sam is there, taking a few pictures of his old man, waiting. Shades on and walk on and bow and encourage applause, encourage connection. It’s 3.15pm. We are on the fly. Heroes We’d Be is a good opener. Good choice, lad, I think to myself. Gives everything a chance to settle down and to get used to the onstage. This is the fourth time we’ve done this festival and the crew are on it. They’re friendly people, too and that always helps…

I’m a blinkered horse. Two things – your eyes can give you away and they can take your thoughts on a trip around the room. I remember playing a gig inside a beautiful church once and I was captivated by the organ and its decorated pipes. Forgetting the words to the opening song was not on my list of things to do that night, so at the next gig, the shades returned to filter the faces and focus the itinerant mind. This afternoon, there’s a load of people out there and I’ve told them that we’re going to spend half an hour reflecting on what The Great War meant to our existence, before we revisit the more familiar stamping ground of murder, ghosts, bad people and the sea. Those visually diffused people don’t let us down. Because I have made these emotional transactions before, I value them, I understand them and I linger over them. It isn’t self-aggrandisement, honest, it’s an attempt to join us all together – what’s the point of standing there, if all you’ve got to give is some received, standardised version of a gig? So we’ll explore what’s actually happening, rather than what is expected to be happening.

We play Breaking Point. It’s not prog rock, it’s not a comfortable, wizardy-dragon, love-enchantment opus and its message can’t really be hidden. It gets them. It’s a song all about the mindset that our forebears fought against… laid down their lives so that we’d never be fascists. We follow it with The Station Parade and as I sing the simple tune I discover why we wrote this and why we played it today. We’ve done it before, of course but it had a resonance today that it may never have again. Who knows? Not me.

I’m glad. The risky half an hour has connected and so now we can have fun with all the hanged men and drowned sailors and pissed blokes in a Berkhamstead pub. And Johnny V. Ronnie strafes the front rows on behalf of John, who loved metal.

Then we’re back in the sweaty corridor and we’re done.

I have done this more than one thousand times. Every time has been different and for as long as I carry on, it will be so because we’ve always depended on the music we wrote. There can never be any excuses.