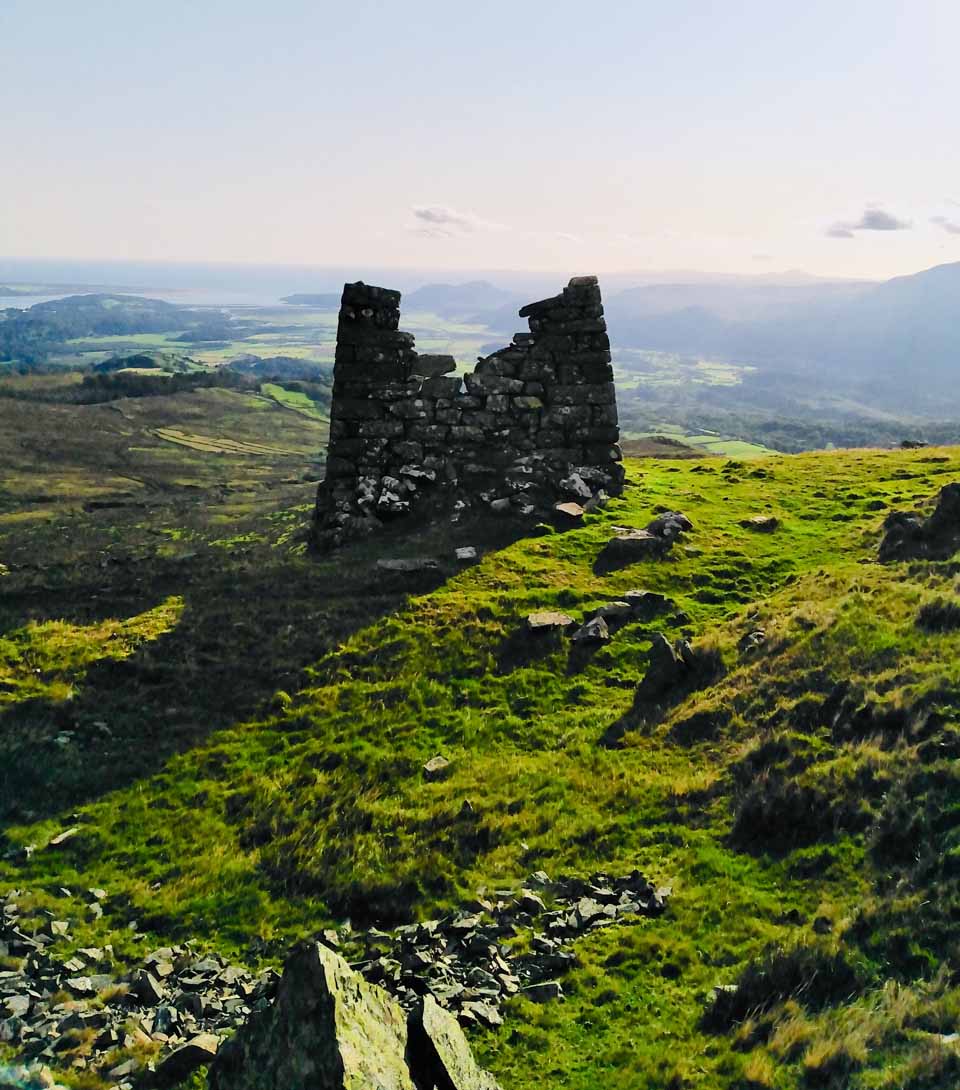 It’s raining. I’m writing. Yesterday I went with Pete and Anna up Cnicht and then round and down past Llyn y Foel, on the teetery path above the waterfall – the one that then clings to the hill for a mile above a fierce drop and makes you think “feck this is a path!” 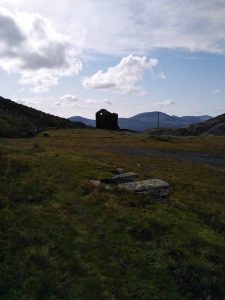 I’m not writing about that though. If you want to go up Cnicht, go to the Cnicht chapter and if you don’t want to teeter, follow the wider path right the way round to Croesor Quarry. You won’t regret it.

I’m writing about football and the rain on the kitchen skylight is alternating between drumming and hammering. It’s 9am and it’s relentless. Every watercourse in the Croesor Valley is in spate and one particular sheep isn’t having any of it. Bleating about the weather eh?

In a Porthmadog supermarket a few hours later, we decide upon a curry. Assorted bits are purchased at the reasonable rates that only certain supermarkets offer. The only mango chutney they have is a fiery hot one, so it will at least be a contrast to the day so far. We elect to return through Prenteg and as we turn off for Llanfrothen, I note that the wipers are no longer necessary. The gown of cloud is still only revealing a tantalising glimpse of mountain ankle but the temperature gauge says it’s 19C and rising…

The track to Croesor quarry is just steep enough to keep you honest and gentle enough to allow you to keep your head up. At 15.15pm the last cloud wiped its feet at the head of Cwm Croesor and dissolved somewhere on the way over to Moel Siabod. I’m left with the sweet smell of sheep shit, shale and Sure as I warm to the task. I’ve always imagined what it was like walking to work up this path. Imagine it. You tramp all that way, in all weathers and then go into the cold bowels of a mountain to mine slate all day… and then walk back. The quarry is a spectacularly placed, almost mystical evocation of industrial decline. Roofs long gone, the shed walls look simultaneously defiant, proud and forlorn. I always feel emotional when I stand in the midst of this place. Thirty miles to the north of here, across the ramparts of Eryri, my own flesh and blood toiled in a place like this. What’s equally poignant is that the slate that was mined and quarried here went to Porthmadog where my flesh and blood sailed it not only to Cardiff, Liverpool and Dublin but to America and further. I feel like I have a stake in this place and all those who dismiss its “ugly scar” legacy, as I remarked when I first went up Manod Mawr, have not the faintest idea what was sacrificed in order for them to pontificate from the safety of their modern lives. 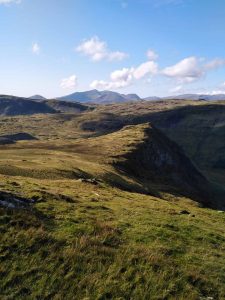 I pick my way for the umpteenth time, from the quarry to the ridge above Llyn Croesor. Usually it would then be a quick scoot round the rim of the cwm to the top of Moelwyn Mawr but I’ve got a little extra time today and so I set out across the sponge, across the edge of Rhosydd quarry, aiming for Moel yr Hydd. The clarity after the morning rain is extraordinary. Everything is working in my favour except the sapping terrain that hasn’t yet released the deluge into the channels. I’m keeping one eye on the ground and the other on the ever-changing and quite magical view. If you’re here when you can’t see a thing and it’s blowing a hoolie and you’re picking your way through what’s left of the Rhosydd workings then I wish you luck. Don’t screw up or you’ll be in deeper than just a mire. There are some big holes in the ground round here and they’re not exactly fenced-off.

I splash my way across to the base of Moel yr Hydd and my phone pings. It’s Richard Lloyd Jones, bard of the parish, old friend and cricketing Comrade. He’s spent the afternoon with my Dad and is letting me know he is preparing a poem for the Bethesda Eisteddfod based on the “Mordaith” exhibition by Pete Jones, who yesterday accompanied me up Cnicht. Coincidence? I doubt it. This is Gwynedd and though the nearest human being to where I’m currently slogging up to this summit is at least two miles away away, there is a kind of inevitable telepathy that seems to be constantly at work hereabouts. The outside world may be twisting and convulsing under its blanket of doubt and fear but here, under the blue skies of this ancient paradise, this message is THE message. Communities, ties that bind, shared heritage, slate, words, art, hard graft, beauty, and joy. 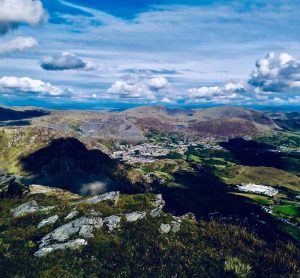 And so to Moel Yr Hydd. Driving northwards from Trawsfynydd, it looks as though you could make one leap of 1500 feet straight from Moel yr Hydd’s crown into Tanygrisiau. With that thought in mind I approach the top with some caution and peer over the edge. It’s deceptive. There’s a green shelf just below… beyond that… BASE jumping anyone? No-one has bothered with a pile of stones. There is no shelter, there are no banana skins, there is no orange peel, no wrappers stuffed in crevices. Anything left in this place would simply blow away. It’s 4.30pm. The August sun is in the right place and the panorama IS Wales, IS everything about the geology, social history, industry, elemental impact, time, tide and sheer stunning beauty of this tiny corner of the globe. I linger, as I so often do. It’s tough to tear myself away but I answer Richard’s text and squelch down to the sorry wire fence that leads across the badlands, before it gives way above Llyn Stwlan to the bare, dry flanks of the highest top in the range. 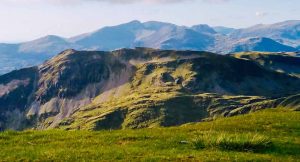 As the morning’s rain percolates down into the myriad lakes that pattern this glorious wilderness, so my energy levels begin to drain. But I’m enjoying it. The legs are being sucked into the peat but there’s a joy in knowing that in ten minutes time, when I meet the rising ground, it won’t be long before one of my favourite summit ridges in all of Wales will be mine. Where the wire ends and the broken flank on my left drops dangerously into the cwm, I bear right and go at it. My heart is thumping and my head has a faint ache. I’m going too fast but an eyes-closed zig-zag across these familiar layers soon brings me to the top.

A cold breeze dries the sweat-soaked bag that I’ve chucked on the ground. I throw on another layer and just sit there. Ten minutes pass. It’s all downhill from here, so there’s no hurry. I look back whence I came, down to the holes in the ground where once men grafted in conditions, the thought of which make me shudder. Imagine it – I say to myself – but I can’t really. We can’t.

I’m suddenly seized by an idea. If reincarnation is a thing, I want to come back as a Welsh mountain sheep. However long you get before that last ride in the lorry, you’d spend your time wandering round up here, Day after day, looking at this. That’d do me. Every now and again you’d be chased around by a ludicrously quick sheepdog, marshalled by a bloke on a quad bike and get dipped, clipped, wormed, permed by the drizzle, blow-dried by the endless westerlies and looked in the eye by humans with too much gear. I’d take that. 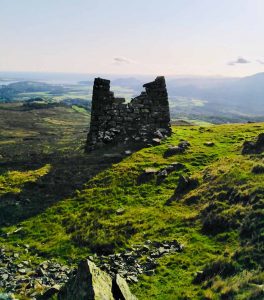 If you’re leaving the summit of Moelwyn Mawr heading for Croesor and you’re not quite sure – keep left. Skirt the edge of the steepest ground on your left until you’re well off the top. It makes sense when a path eventually appears. Don’t fudge it. Keep left.

This has been my second blast around the hills in two days and my knees are having a word. After the steep descent, the ridge eases to a very welcome spring-loaded amble. The low sun bathes the scene with an exquisite light and I reach the Tanygrisiau lane pretty quickly. A man in expensive clothes closes the bottom gate behind his shiny new Mercedes and his elderly passengers wave as I walk past. They are definitely off the beaten track. Fair play to them. That’s what it’s all about.