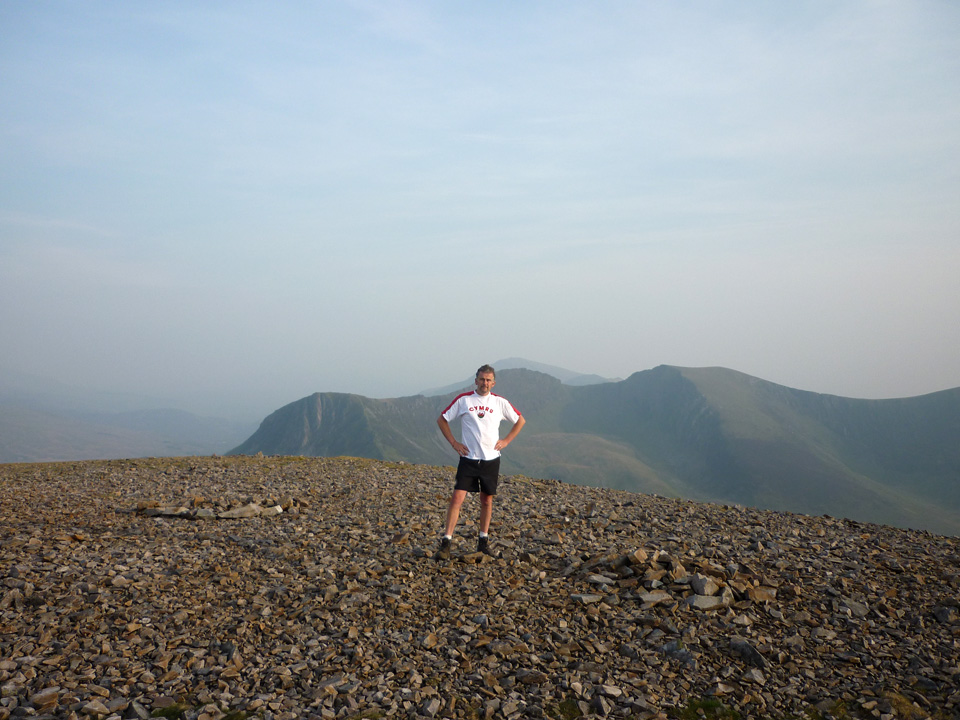 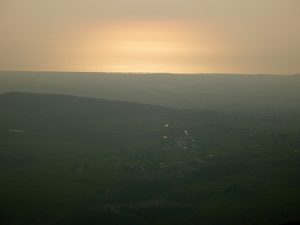 Some people call it the Elephant Mountain. It actually does look a bit like a elephant, although you have to allow your imagination to wander a bit where the legs are concerned… and the trunk… and ears. I guess it’s better than Big Mountain. From the top of our road it always looked like a bit of a lump, only ever assuming an elephantine appearance when seen from the back road from Bethel to Caernarfon. Can elephants crouch and hide their trunk and ears? Mynydd Mawr as an elephant. Discuss further. Elsewhere.

It’s a late sojourn, this. All the books tell you to go from Planwydd near Rhyd Ddu because the path up from Fron is dull and you don’t see the cliffs hanging over Dyffryn Nantlle, whereas if you go their way, there’s more interest. I beg to differ, especially if you’ve already been up on the eastern hills of the Nantlle Ridge. If you have, you’ve seen all that stuff anyway – and better – so the easy tramp up from Fron makes perfect sense. If you haven’t been onto those Nantlle hills, then hang on for a while and we’ll go there one day. Mynydd Mawr is for the late afternoon, when the sun is on the way down. 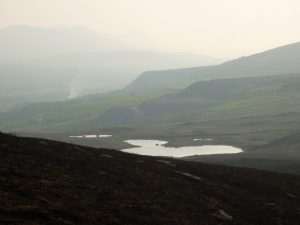 Charlie and I are on station pickup duties in Bangor, so Mynydd Mawr is selected because it’s on the way, it’s a nice day and it’s not going to take too long. It’s one of those hills to enjoy like that. We park on the grass next to a green lane that weaves through the old quarries. Where the lane runs out, a track carries on across the heather in an eastward direction and whilst the Planwydd advocates might not reckon much to the surroundings, I’m a big fan. Things look different and there’s a sense that not many people pass this way. At a crossroads of paths we turn right. Straight on and we’d end up in Betws Garmon – left and we really would be taking it easy onto Moel Tryfan. In a short time we reach a bit of rugged elephant flank, arriving at the edge of Cwm Du, a dark hollow above which even the crows are reluctant to circle. They perch on the buttresses of its cold walls, Craig Cwm Du, with a sceptical air, before launching themselves into the west, into the sunshine. If a rabbit dies in Cwm Du (of loneliness) its body lies undisturbed. “I’m not going down there…” says a young crow to his mate, although it sounds to us like “caw, caw, caw, caw, caw…” 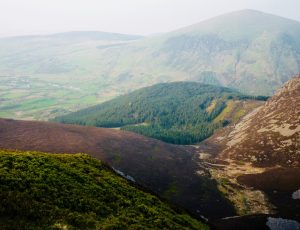 The path skirts the Cwm, rising steadily, never steeply and before very long, having left the the black cwm behind, brings us out on the stony top. The summit is like some version of a pebble beach. Perhaps it was – one for the geology students. Like so many of the standalone outliers in Eryri, the views are sumptuous. It’s been a warm, day and the evening is hazy but this somehow adds to the vista. The lack of definition obscures the sense of scale and presents the Nantlle Ridge in silhouette as a Tolkiensque barrier to distant lands, whilst Yr Wyddfa is rendered huge – Mont Blanc without the snow. These mountains never fail to present arresting sights. Even the little ones like Mynydd Mawr offer breathtaking moments such as these. Neither tired nor challenged, we circle the summit crown and breathe it all in. 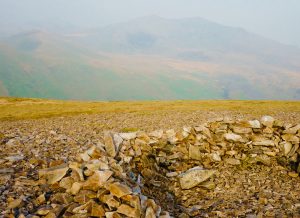 Taking us by surprise, a lone figure arrives at the top, carrying a bag to which are strapped the tools of a job. He greets us in a strong local accent and my first thought is that he has come to set up an easel and paint. He has a fold-up chair but as he speaks to us, he busies himself unpacking what looks like a clipboard and pens. In the end, I can leave it no longer and politely enquire what he’s doing on the top of Mynydd Mawr with lists and markers. He smiles. He’s a race marshal for Ras Mynydd Mawr, the fell race which he estimates is just about to start – and he’s the most important race marshal because he is the man who will tick off the runners when they arrive at the highest point of the elephant’s back. He will tick each vest number before, without pausing, the runners sprint back down in their bids for glory. Squinting down onto the gold-flooded hillside, we can see the leaders. The marshal says he’s been doing this for years and that by the time he gets back to Fron, everyone will be gone – ice baths for the contenders, pints for the journeymen and organisers. Before we say goodbye and make our way back down through the Eryri Harriers and their visiting rivals, he tells us that when he gets home, he’ll have earned his dinner. 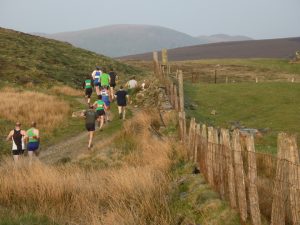 “My wife will ask me who won… and I’ll say, how the bloody hell should I know?… I’ll tell you tomorrow. She asks every bloody year…” and he laughs and waves us off.

We make way for the strung-out field, stepping to one side as the leaders, light-footed and waif-like, make easy work of the gradient. The sun continues to sink and the depths of Cwm Du are invisible. Nearer Fron than the summit, we pass the veterans. Good luck to them, they must be fitter than me.