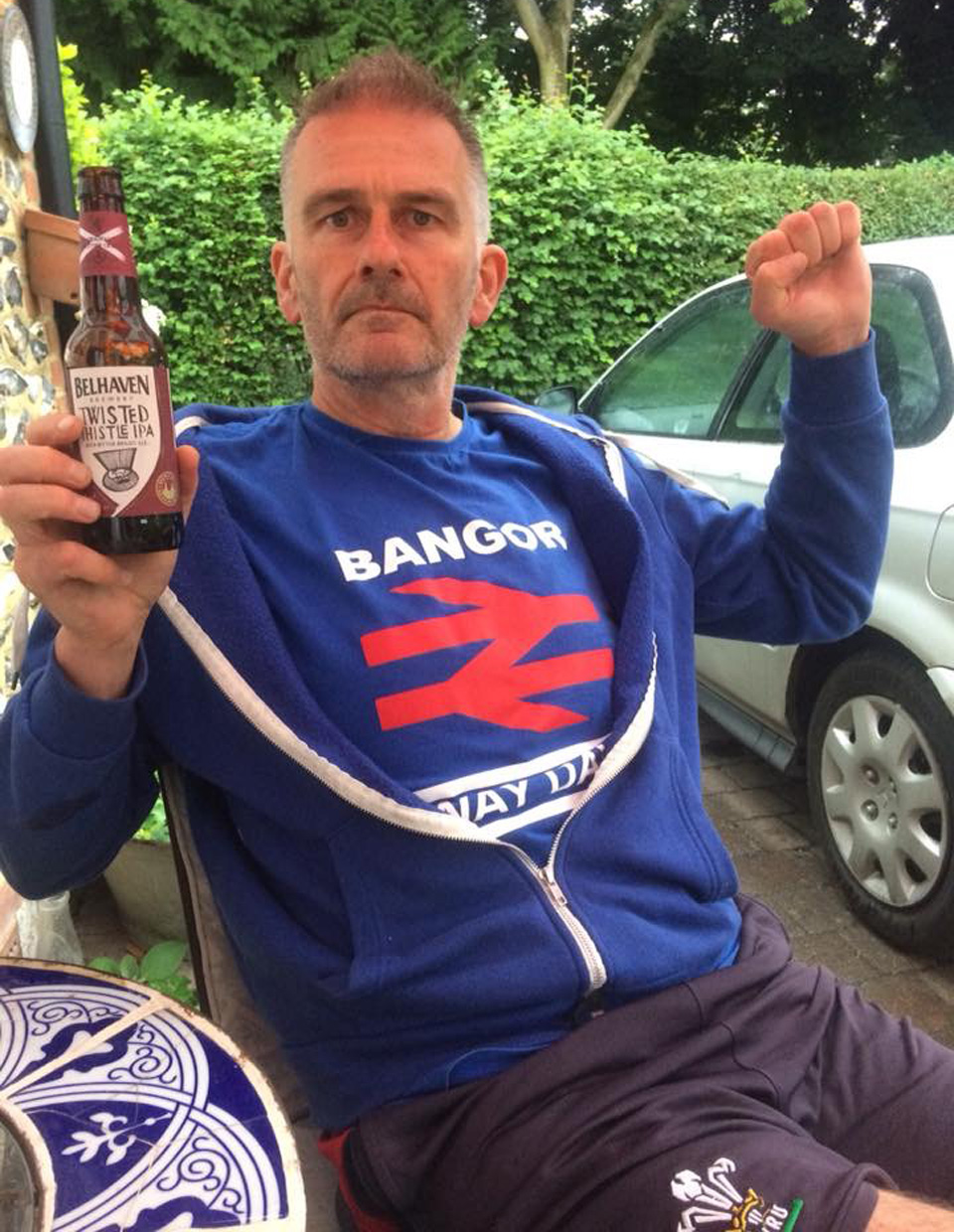 Imagine what the recreation facility for the workers at a windswept secret Soviet weapons research institute looks like, thirty years after a chemical leak forced its closure. Imagine its limping custodians, still in their uniforms, sweeping the stands where Olga and Svetlana once cheered Igor and Yuri as they tussled on the last bend of the track, in the final of the nose-cone machine-shop division’s 400m hurdles. Imagine chips, fried in a black mess, so old, so rancid, that it might have been used engine oil collected from rusting drums behind the stone-cold toilet blocks, marked with the fading stencils of ‘man’ and ‘woman’.

Imagine a pole-dancer taking the train. She sits, minding her own business, administrating the spin-offs of her honest trade, Sharpie in hand, pre-signing postcards, the swift strokes of the permanent marker carelessly obscuring or leaving exposed the Dutch wink or the foisted cleavage. Her feline nom de plume evokes the burlesque – her presence on Arriva Trains Wales, if more prosaic, more than stirs the interest of her fellow travellers.

A child screams, dragged from the entrance of Brewer’s Fayre, denied an extra ice-cream by harsh parents, where later a harassed barman will strenuously assert that last drinks will be taken with due respect to his relentless day of drudgery, onion rings and Brains Smooth.

A man, twisted in a sheet, lies asleep on a Premier Inn bed, his senses scrambled, discombobulated by The M4, The Great Western Hotel, trains, taxis and the hill from Caddoxton – and the drink. From Madeira to Reykjavik, Chisnau to Lyngby, Vienna to Paris, his grand tours are the stuff of legend but now he snores in a Splott slumber, his day done, prematurely but no less satisfactory for all that.

A woman offers pasties in the gritty pub, where the banners are unfurled again in commemoration of times and characters, the departed and the reformed. Toasts are raised, fists clenched, drinks drunk, shoulders hugged.

From the south, across there, where the Quantocks hide in the grim, grey distance, rain rides to meet the icy air streaming down from the Beacons and the wastes of mid-Wales and the ramparts of Eryri. Tomorrow the meteorological battle lines will be drawn and the snow will fall with abandon and new sagas of epic journeys will be written. Today, the only salt in Barry will be on the rank, genuinely disgusting, portakabin chips and on the steps of the funeral parlour where the chance of a fall is something that Spickett and Son could not countenance. They have thrown the wind to caution.

We meet in the car park of the Premier Inn, Cardiff South. Splott, if you will. I have travelled alone down the M4 and they have travelled the roof of Wales – the A470. They left Beach Road in Bangor at 6am and lost traction below the Beacons. We shall all lose traction in one way or another in the next 13 hours. We welcome the walk into the city. Bangor will convene in the Great Western Hotel – now a Wetherspoons-House-of-Brexit but convenient for the railway arrivals and our onward journey to Caddoxton… or Kazakhstan as it is quickly christened.

As always, allowances are made for the wilfully contrary political prodding in the broad blue church. There are many strong feelings about the state of the nation among the ranks, this certainly isn’t a bland coalition but in the end, as the space fills, it is a pole-dancer, one Kitty Velour and her luminous presence aboard the Citizens Express that kicks talk of Theresa May into the long grass. No Bangor City away-day is without an element of the surreal – in fact had Kitty wrapped herself around one of the vertical yellow handrails of the Arriva Trains Diesel Multiple Unit between Flint and Shotton, or even twerked along the aisle in Prestatyn, many of those present would have more than likely considered it to be nothing particularly out of the ordinary. Social media being what it is, those of us in The Great Western who arrived by car are brought up to speed on the Velour-variant by means of the mobile telephone. The concensus from the footage is that if Bangor’s midfield performs with the same agility and energetic gusto at Jenner Park, the day will go in our favour.

We brace ourselves for the chilly stroll over to Cardiff Central. The miserable ticket-seller growls impatiently at us, introducing a wholly uncalled-for level of rudeness to the proceedings. She is the only rude person we meet today and she isn’t Kitty Velour by any stretch. At the platorm, trains come and go, drowning out as they do, the utterly incomprehensible public address system and more by instinct than any clear guidance, we board the train to Caddoxton and trundle past the gentrified Cardiff suburbs, an occasional song raising the eyebrows of the bemused locals, who indulge us with smiles, satisfied they are safe.

Fortified with hard liquor, a member of the West London Blues, seeks directions at the station car park from a waiting driver and engages in further pleasantries and explanations, such that we follow our noses, perhaps thirty of us, up the hill opposite, leaving him to his casual chat-up. Five minutes into our climb, a passing car sweeps by and in the passenger seat he sits, waving like a casual royal – wearing his charm like an invisible cloak, more front than Spickett and Son. God knows what he told the kind lady who agreed to convey him to The William IV – a war wound? When we arrive at the pub he is waiting, predictably, on the pavement outside, waving a jar, asking what took us so long. Inside, mine hosts’ welcome is friendly. An advance party of more respectable Citizens are already ensconced. They are comparing clips of Kitty (strictly for art’s sake, of course) and report that more blue shirts are on the way.

After the ‘cup-of-tea’ effect of a pint of Brains Smooth, we discover a hidden Grolsch font and throw one down before setting off for the ground on foot. Taxis have been ordered but our platoon has rejected such extravagances (until later… ) and we take the avenues and alleyways of Barry, arriving at Jenner Park fifteen minutes before kick-off. Dystopia is the only word. It is a chillingly, crushingly, dreadful place. Ghostly faces leer from the windows of the clubhouse that is at least half a mile from the pitch. A pale boy strikes a drum, high in the cavernous stand but his weak arm propels no force or verve and the dull thud he produces is mournful – sad and lost. The cheeseburger soaks the Grolsch, the chip oil saw better days in 1974 and all that’s missing is a giant picture of Mao or Stalin. We wander in search of a vantage point but without the binoculars of a gulag watchtower guard, it’s a vain pursuit. In the end, we occupy one side of the home fans’ preferred stand and the baiting begins.

The game itself takes place so far away that it’s like not really being there at all. It’s like the start of a Doctor Who Christmas Special – a bit weird and hard to get your head round – will the players suddenly swirl into a time/space continuum and emerge wearing wool jerseys and hobnail boots? The to and fro of chants imitates reality but even Dean Rittenberg’s goal fails to cut through the nothingness and we begin to wonder if we have crossed into some hellishly skewed Narnia. Somewhere behind a disused portakabin there is most likely a pile of rusting sickles and grease guns, canisters, bullet-casings, rotting athletics vests, an upturned medal presentation podium, one discus and some half-burned photographs of scarred-kneed urchins. 1-0 to us. Half-time.

Retiring to the clubhouse bunker, we seek sharpeners, liveners, something… anything. Treble whiskies and Desperados – what else can we do? The soldiers of fortune in these parts, like everyone else, save for the Cardiff ticket-woman, are friendly to a fault. A corporate affair is being conducted in the corner. Sausage rolls and Carling. The sponsor holds court until our former Association Chairman begins to croon Elvis and the man stops, open-mouthed, as the whole room joins in. We know what’s coming… ”Cos I can’t help, falling in love with you… CITY… CITY… CITY !”

We move to the opposite shed for the second half and enjoy singing our songs. They barely reach the touchline. An occasional damp thud from the spectral drummer boy blows across the wasteland. Barry play with more purpose and although they don’t deserve the softest of penalties, they deserve the equaliser. The proceedings shamble to a conclusion without further incident and after applauding the players on their long trek to the showers, we slip out onto the street and head for the train. The Barry Town fans celebrate the draw as though Lev Yashin had just raised aloft the World Cup. Since their return to the Welsh Premier League, they have quickly appointed themselves its ‘best fans’. Social media is awash with their self-regarding references to travelling away and making a lot of noise. It is no surprise they travel to away games – if Jenner Park was your only experience of watching football, going to Prestatyn would be like going to the Camp Nou. In fairness, as we file out, one or two hold out their hands… their cold hands… and wish us safe journeys. They have an odd look, as though they’ve paid the ferryman in advance but been allowed by a Faustian pact to return to Jenner Park every other Saturday. At the station we board the Kazakhstan donkey with a point under our belts but none to prove. We are Bangor City. The pubs of Christmas Cardiff beckon and we sprinkle ourselves, sharing the love, across the festooned metropolis. A parliamentary level of moidering is achieved amongst the waitress-served Jagerbombs in The Old Arcade and at The Goat Major, as we swill our way to catharsis, optimism, incoherence, noodles and a taxi.

Long after the floodlights in Jenner Park are switched off, somewhere in a glittering palace of fleeting dreams, around a polished, chromed pole, Kitty cavorts and spins with practised precision – postcards for punters arranged in the foyer – signed on Arriva Trains Wales, witnessed by The Farrar End.

In the Brewer’s Fayre, the harassed barman warns the platoon that this will be the last one. It won’t be…

The man in the motel sheet slumbers as the drizzle outside turns to rain. He dreams that Olga Korbut has driven him up Glanrafon Hill before dropping him off at Rascals where a barefooted stripper does keepy-uppy with a tennis ball.

The woman in the pub wipes the tops, whilst a clutch of Barry Town fans watch Match of the Day – more football at a distance. Sorry no pasties left tonight lads, the Bangor fans ate them all at lunchtime.

North of the Quantocks, the battle is lost. Return journeys through the muffled white-out are a nightmare. If we’d known for certain it would have been like this, would we have gone?