I went to see Public Service Broadcasting in Bangor. Pontio is an excellent venue, although next to it stands the most utterly ridiculous ‘thing’ anyone has ever had the temerity to refer to as ‘art’. If you’ve seen it, you’ll know. It is on the site of the old Theatr Gwynedd where a musically stripped-down JUMP once had the joy of supporting Midge Ure and I walked up to the mic hearing stage-whispers of “there’s a moiderer for yer”. I used to go there for late night showings of films about Woodstock and Hendrix, straight from the pub. Easy Rider. You can see the Glanrafon from Pontio’s terrace. It’s just a black and white building now – in 1982 it was Madison Square Gardens. 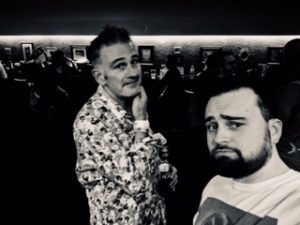 PSB were superb in Bangor and received a fantastic welcome. Their latest album Every Valley is about the mining industry in Wales and if the band (from London) felt nervous about delivering it on Welsh soil, they needn’t have. It’s a terrific piece of work and the audience’s empathy with the visual aspects of the show was clear – and that was in Bangor – what it must have gone down like in Blackwood Institute (another ground I have stamped in my relentless journey to partially respectable obscurity) is anyone’s guess. I bet they took the roof off. The music is in turns, uplifting, industrial, hypnotic, dark, light, exuberant and gets under the skin of its subjects in the kind of inexplicable way that is… well… inexplicable. As for pigeonholing them. Forget it – some call them ‘art rock’ but that slope is more slippery than the one upon which stands Bangor’s very own papier mâché eyesore. They’re just a great band.

When we played Blackwood in 1997, it was the fourth gig in a row after Newcastle, Manchester and Liverpool. We ate Shepherds Pie in Hereford on the way there. One of the finest meals ever eaten, anywhere, by anyone. The headliner, our esteemed friend Fish, described playing Blackwood as like playing Thunderdome…he hadn’t played Newbridge Memo… I had. That was Thunderdome.

Just before the end of the show, the band were joined by Lisa Jên Brown, singer from 9Bach, who sang a duet with PSB’s J. Willgoose Esq and I pondered on whether she came to the gig by Purple Motors bus (well, she would have done when I was a kid). She’s from Bethesda you see and she appears on Every Valley. The song was performed in complete pin-drop silence and had the hairs not gone up on the back every neck present, I’d have been shocked. The whole thing was brilliant and I was driving, so the ‘warmth to flood the heart’ hadn’t deceived me.

One treasurable aspect of being bloody-minded and resilient and stoical and keeping one’s own musical journey alive – albeit that perhaps the Purple Motors bus reference would have fitted better in respect of my own forays in the musical shadows – is that you meet loads of genuinely nice people along the way. It is true that great riches will never present me with any headaches but equally that the kindnesses of those who we as a band have touched in some way, render every hour on the motorway more than worthwhile. That accounted for my presence at not one but two PSB gigs. Thanks George – I think in the bank of favours, you are much in credit…

The following week I went with Sam to The Royal Albert Hall. Whilst I’m not too keen on conspicuous displays of wealth, at least the statue next to the Albert Hall doesn’t look like a piece of the Teletubbies’ garden that’s been fashioned from snot and fibreglass – but enough about Bangor’s famous artwork – it’s making me cross just thinking about it. We began the evening in Kensington High Street at a pub I’d last visited with Jo on our way to see Kris Kristofferson in the big hall. Genre has never had anything remotely to do with my musical tastes – that had been an utterly spell-binding evening, as had the previous KK set we’d witnessed at The Mean Fiddler in Harlesden, a venue I’m proud to have played on numerous occasions. Ok, the connection to one of the ‘greats’ is tenuous but I also played Shepherds Bush Empire one night and saw Suzy Boggus there a few weeks later. I wonder if she knew… 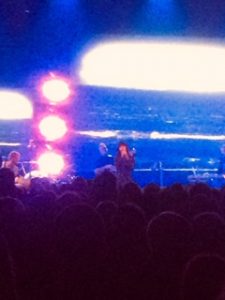 We had beer in The Goat Tavern that was crisp, clean and expensive and were joined by friends Graham and Andy, for whom PSB were a regular watch. Leaving them to fuel up a little more, we took the short walk to the RAH and stood in the queue marked Guest List. How come? In short, it’s because JUMP played a gig in The Limelight Club in Crewe one night in 2004, where a light came on for a young man. I’m not saying for a minute that anything specific we played or sang had any mighty impact but it was during and after seeing that gig, that the fates propelled him towards his destiny as an audio expert. He told me. So it’s true. It was much, much later in 2015, the same fates connected us once again, when I was due to write a story that featured some speakers, a large arena and the most excellent band, Placebo. A voice on the phone (remember George?) suggested that there could only be one John Dexter Jones. My identity thus confirmed, he told me his story about the inspiration he drew as a very young man at that gig in Crewe. Since then we have been friends. It is worth noting that mention should therefore be made of Shep, the in-house engineer at Crewe Limelight. He was another audio expert who directly, if unknowingly, shaped this tale.

Courtesy of George’s kindness and technical role at the gig (and therefore close familiarity with the band), we picked up our comps and hastily rearranged our evening in the light of the presentation of after-show party wristbands – an altogether unexpected but nevertheless useful tool in the construction of rock and roll myths (regular readers will be familiar with the ‘first principles’ that apply in these scenarios – ‘attend, inflate, bathe in reflected glory’ etc). Instead of the last train home, it would have to be the nightbus…

I wasn’t moved by the support act. At the age of 55, if someone had offered me that thirty minute slot in return for say, my right arm, I’d have been straight to B and Q to buy the saw. I’m not down on them or their music in particular but as an open goal into which to smash the ball of of your musical message – well, let’s just say their gentle sidefoot trickled past the post, for me at least.

PSB had not been a flash in the pan. It wasn’t just a Bangor thing. They picked up my emotions where they’d left off in my home city and ran with them through another memorable set. Lisa Jên Brown joined them again and I took time from my privileged position behind the mixing desk to look around at the thousands of faces who, minutes after rocking out in their boxes, were as respectful as the Pontio crowd had been. It was, as they say, ‘sweet as’. Someone from Bethesda singing at the Albert Hall – my Taid would have loved that. He sang in Stoke on Trent with the Tregarth Male Voice Choir – I think was the furthest they travelled. When the band finished its set, The Beaufort Male Choir from south Wales closed the show. Dry eyes in the house? Doubt it.

When JUMP hit 25 years old, one of our celebration gigs took place in Neuadd Ogwen, in Bethesda. My Taid had sung and acted in that hall. When we finished, we took a bow – it was a special night. As we left the stage, I sneaked a look back, to imprint the memory – I saw one or two of the Beaufort Choir do the same. I might never play the Albert Hall but if I do, I’ll be sure and tell you. Maybe Pontio would be a more realistic proposition but then when are you supposed to stop dreaming? 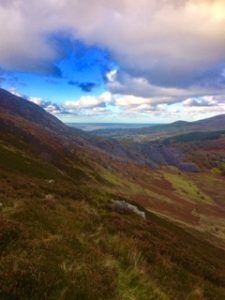 Having bid farewell to our benefactor, whose job it now was to load out, we made for the party. Obviously, confidentiality precludes my placing into the public domain too many details of this wild extravaganza but yes, The Beaufort Choir sang, yes we joined in on ‘I Bob Un Sydd Ffyddlon’ and ‘Calon Lan’ (and so technically speaking, have sung in the Albert Hall) and yes we hobnobbed with the glitterati and drank Bellhaven Black until the nightbus, red not purple, spirited us away.

As we walked down the concourse at Heathrow Terminal 5 – for that is where the nightbus took us on the journey to Uber and Sam’s gaff in Egham – my mind sought to draw all the strands of this story together. My problem, as always, was where it should stop. And then I thought – it doesn’t matter – it’s like the nightbus – there’ll always be another one, so I stopped here.