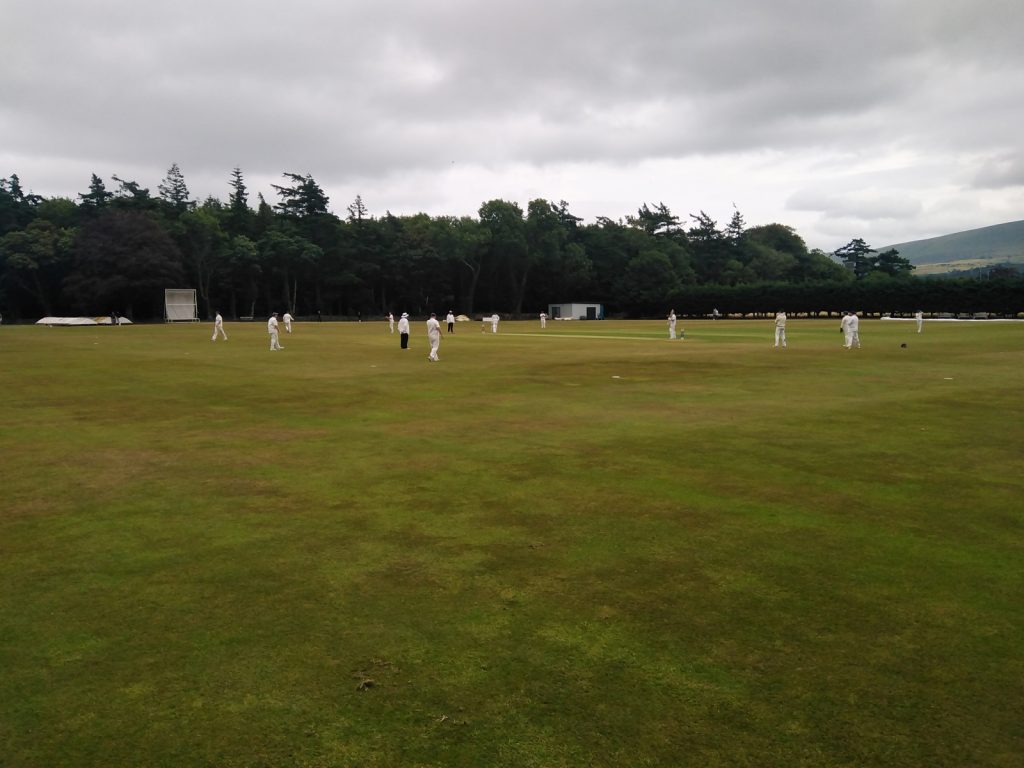 The trees divide opinion. A ring of conifers where once a wire fence sufficed. The old slate wall has been ploughed back into the no-man’s-land where Dennis’s dogs once snuffled and foraged for rats, and across which, the ball Gordon Williams hit into Penrhyn Park, sailed to its eternal disappearance. Now there is a taut green fence, safe and sound. The nets have moved. We learned to play with the evening sun in our eyes. Tuesdays, Thursdays…but actually all days, every day, if anyone, anyone at all, was around.

The machine shed is new. The green doors are no more. I slept in the old one, head on a bag of grass seed, insulated from the mice by club-price Youngers No. 3 bitter and the threadbare long-sleeve sweater that my Dad left hanging from the heavy roller. Why cycle to Penrhos at midnight and return first thing to shave the strip, touch up the markings and give it a final flatten for the county match, when I could wake, as rough as Rhyl, and save my legs for batting. Bill the Steward would arrive soon enough to open up. A pregame shower and all was well.

I lived there, really. Lived and learned. It’s changed and yet it hasn’t. It’s different but, as I hoped would be confirmed, it’s the same. More than thirty years since I last played there, that place is as much a part of me as I am a part of it. To stand in the middle at Tŷ Newydd, in the groove, with runs on the board, pausing between overs to watch the evening sun bathe Carnedd Dafydd in gold, is to have been transported somewhere close to sporting Nirvana. What a place.

Glyn welcomes us. He does so succinctly from a prepared script. His name will be associated with Bangor Cricket Club for all time, his legacy assured, his conviction that the game delivers so much than sport, secure. Richard speaks as well, first to thank Glyn and then to avail us of his thoughts. Everyone present knows that this intervention will be neither succinct nor precisely structured. An englyn (look it up) is his only concession to framework. Tangential as it might appear at times, the themes are clear enough – everyone sitting in the brand new pavilion is living proof of their truth. Just when we fear he might cross the line into sentimentality, he steers away, and those who will never be in our midst again are respectfully remembered without pathos. Like Glyn, Richard is an unimpeachable servant – another who has devoted a significant part of his life to actively and practically support every facet of Bangor Cricket Club. As he sits down, chairs are pushed back from tables, glasses are refreshed, and we begin the hundreds of conversations that will take us from here to the beginning and back.

There was a game on, and though we sat and ate and drank and reminisced, there was still an eye on the score – still a weighing up of the attack and a measurement of the quality of shot. Are they as good as we were – with their huge kitbags, their arm guards, their reverse sweeps and their helmets? Probably. But we’d still fancy our chances. Which ex-player doesn’t?

I wander round the ground with two Mikes and one Huw Gavin. There is only one Huw Gavin. Of that, there is no doubt. Michael Randall is one Mike, friend and up-and-coming young player when I was at large – Mike Davies the other, my contemporary, friend and possessor of the most elegant left-handed cover-drive I have ever seen. Talent in abundance… and poise. That was Mike.

The years have not melted away. They have merely been placed into suspension. An unsuccessful appeal in the middle provokes a rambunctious rebuttal from Huw Gavin. We shake our heads. He is, truth be told (and rather comfortingly), the same irreverent fifteen-year-old I last saw in the mid 80s. Broken cloud swirls around the feet of Penyrolewen on what has turned out to be a rather better day than we expected when we awoke to the ticking of rain on the window.

Our slow circuit is steeped in the kind of affirmation that is rare in the ‘instant’ world. How long did it take to ‘know’ what we know? How long to build the appreciation of what matters and what will stand the test of time, so that decades later, we are as easy in each other’s company as we were when the future was four times as long as the past.

The lap done, we order beer. Menai Bridge have inflicted a comprehensive defeat on the home side and we clap the teams from the field. The victors respectfully acknowledge the applause and then disappear into their dressing room and whoop and holler like Americans. That wouldn’t have happened in ‘our day’ – neither the defeat to Menai Bridge, nor the conspicuous celebration – but we begrudge them nothing. Times have changed, sport in general has evolved to assimilate all manner of contemporary cultural and media influences, and if the game we love is to survive then perhaps we must stand aside and allow them in without resistance. Progress travels in one direction, and whatever its dubious shortcomings, it is never backwards.

The reunion is drawing close to its conclusion. There will be no extensive gallery of digital photographs to commemorate the event. A group photo is taken but we four are still at long leg, by the shed, so posterity will not record us. Phones have not been much in evidence. They are rare, these occasions when physical conversations outflank the digital world, but all the more precious for that. Just as our myriad collective memories required no supporting evidence, so, on this day when John Cowell and Ken Jones sat amongst us, it is enough to have enjoyed the moments.

My taxi arrives on time.

“Did you play for Bangor, then?”