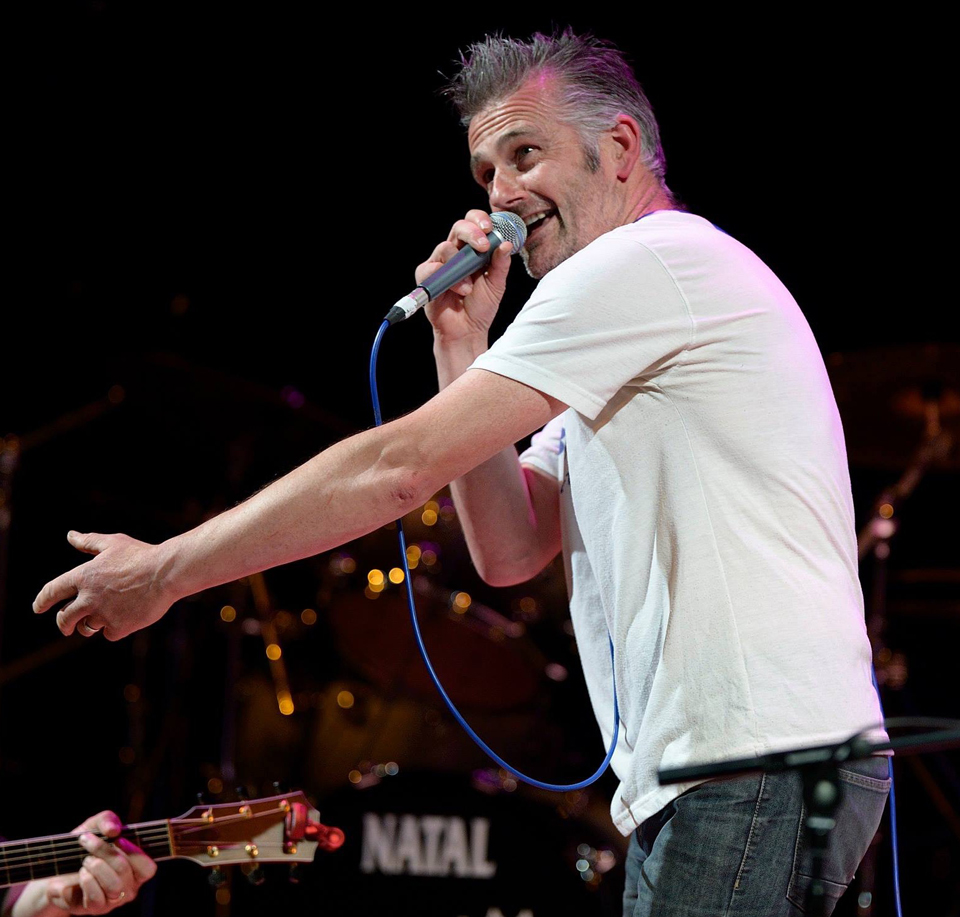 They’ve sold ten million records and they had a hit single. Syncopate your nodding head and sing the refrain from Two Princes and everyone will remember. We’re doing an acoustic support to the Spin Doctors at The Stables Theatre near Milton Keynes, somewhere we’ve played many times, performing the same role. We supported The Blockheads there once – they were as cool as the fridge they shared their beer from and as nice as that beer tasted. The Spin Doctors too, seem friendly enough. So it’s just me Steve and Ronnie, a couple of acoustic guitars and all the time in the world.

The thrust stage at The Stables sits in front of the PA. Most rock concerts don’t take place in this way. Most rock concerts see the band behind the PA, hearing themselves by way of a monitoring system either laid out on the floor, or through ear-pieces. There, that’s pretty simple isn’t it? Of course if you’re playing in front of the PA, that increases your chances of feedback and can feel a little out of control because it’s not the norm. Balancing things up at The Stables requires the band to a/ be present and b/ find a happy medium. As a jobbing, pond-dwelling musician with experience of just about every challenging situation in the world of rock, the way to overcome the idiosyncrasies of somewhere like The Stables, is to base your judgement upon something as simple as listening, trust the House engineer, strike a balance and then say “yeah, that’s ok, that’ll do, thanks.” Then you go and get a beer.

If you are the road manager of The Spin Doctors, your approach, when faced with such a revolutionary proposition, is to stand at the vocal microphone for a good thirty minutes and embark on possibly the most pointless ritual ever seen on a stage, anywhere. Even as I begin to describe his actions I’m beginning to wonder if this is happening. In the empty theatre, the tour manager taps feverishly on his laptop and me, Steve and Ronnie watch the clock greedily eat our available soundcheck time, as the road manager begins to deliberately encourage painful and deafening waves of feedback from the stage. Fashioning his mouth into the shape of a koi carp around five millimetres from the microphone, he holds the position until, predictably an all pervading howl of feedback fills the room. The sound engineer, a hired hand for the tour, is now expected to adjust a graphic equaliser to eliminate the offending frequency. He does so and Mr Carp now speaks into the microphone and sounds like a very small Dalek trapped inside a box. At this point the engineer tinkers with the Dalek-voice until it sounds human… and then Mr Carp returns to almost swallowing the capsule of the mic and the whole sad and excruciatingly painful process starts all over again. If this wasn’t happening before my very eyes and I’d seen it on a DVD, I’d venture that the makers of Spinal Tap couldn’t have filmed a better scene.

Half an hour goes by in this fashion. The front of house PA is switched on and off, the monitors are switched on and off, turned up and down and Mr Carp is exasperated. And then lo! the band’s singer, the man who will ACTUALLY be singing in the gig ambles to the stage, offers us an apologetic nod and sings a few lines into the mic.

“Just turn the foldback down a little, man… I mean… I can hear it pretty big in front of house but it’s OK…”

With that he’s waving to us to do our soundcheck. What he did took around 30 seconds and not at any point did he shape his mouth like a carp and place fishy lips around the shell of the microphone. Minutes later, the hired engineer walks past and gives us a sheepish apology.

“Sorry about that, lads…”

He must want to roll his eyes… but he’s a pro. I say that I thought he handled it pretty well and offer hopes that he’s on good money. He warms to the conversation and wishes us luck. In five minutes, The Stables excellent house engineer has us sorted and this affords us the luxury of running through a song we hadn’t played in stripped down format. It works well and as we engage in a little self-congratulatory nodding, The Spin Doctors bassist walks by and gives us a thumbs-up. We’re about to clear off for a drink when Mr Koi Carp, Grand Master of Feedback himself, emerges from a dark corner of the theatre to loudly pronounce, as his Eureka! moment seizes him, that –

“THAT is what this place is designed for!!!”

We restrain ourselves and refrain from acting in shocked amazement.

Around 200 people come to the gig. That’s ok for us but not great for them. We do well and business at the merchandise desk is brisk. I stay there and hear The Spin Doctors through the opening and closing of the auditorium doors. It’s blues rock. It’s ok but I find it a bit magnolia. I go into the theatre to listen to Two Princes. They extend it in the fashion that a band with a limited repertoire might and the familiar ‘what if the luck had been different’ pang rises up in my chest as I watch them milk it. Good luck to them, though. They wrote a hit.

The evening is not quite over. In true rock-star tradition and in a fashion that elevates incongruity to a whole new altitude, a meet and greet has been organised. Barriers, of the sort customarily seen at police incidents, are produced to create a channel down which a few dozen people shuffle toward their idols and having obediently remained within the barriered corridor, offer loyal affirmations of love and praise. In return, they get the kind of attention that a passenger might get from a smiling flight attendant during an emergency procedures drill. If the kindly singer pointed toward the exit with an outstretched palm, it wouldn’t surprise me.

It’s amusing. In a way, I suppose it’s refreshing to see a bunch of forty-something year old men acting like rock gods in the near-deserted foyer of a small provincial theatre just south of Milton Keynes. They’ve drunk from the cup of stardom, kissed the magic stone of a proper deal and the sparkly dust is just about still on their shoulders. I feel a bit sad, a bit cynical and a bit heartened all at once. There they are, still doing it, even though they’re riding the slow train now. Who am I to poke fun or scorn their road manager or smile at their stadium meet and greet?

We’re driving back towards Leighton Buzzard on the ‘new’ road. Steve’s satnav says we’re in a field and we begin to answer the question. Who are we? We’re as good as them… easy! We’re a pond-life band from Britain looking at the light above, through a great magnifying glass of filthy water. Alongside us, our peers twitch and twist, feeding, like us, on any and every available crumb. We are soused in the vinegar of our wit and we’re as steadfastly jaundiced as we are lost in the self-belief that one day, someone will catch us in their net.

We drop Ronnie off in Aylesbury, it’s late. Work tomorrow.