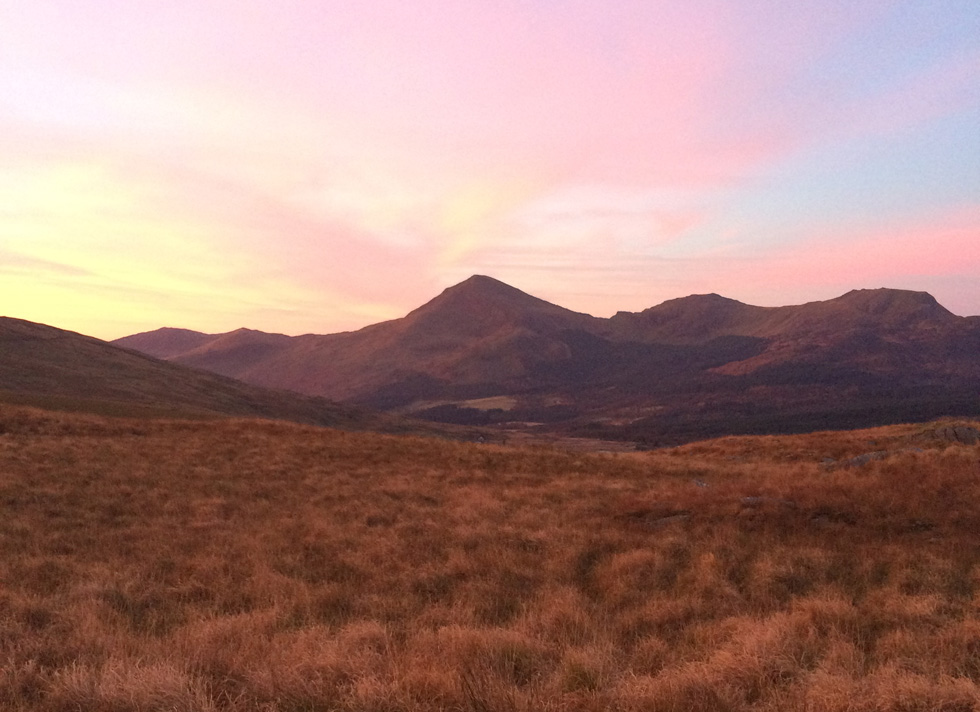 6am. Rhyd Ddu. I won’t always be able to do this. As the first gate slams behind me and I cross the narrow rails of the Welsh Highland Railway, the skyline ahead glows and that sobering thought flits across my still-coming-to-terms-with-the-cold, early morning mis-firing of the synapses. I won’t always be able to do this. Perhaps it’s one of the most stark acknowledgements of mortal recognition – the wet-fish slap in the face that consigns the painless, boundless, thoughtless, youthful energy that funnelled into my first mountain days – to the glorious past. But the sharp relief of that understanding, adds value. Today, from bleary, torchlit, freezing beginnings, to the summit and back, every moment will be absorbed and processed, fixed and etched in a mind’s eye that knows too well that, as the car-sticker wisdom (if only it was heeded) proclaims – one life, live it. 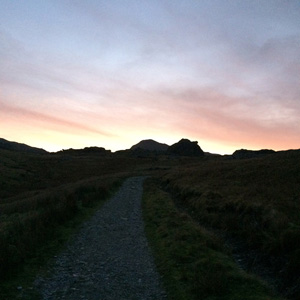 There is no better place than the mountains. The beach runs them close, with its eternal tides, its shifting liminality, salt-sprayed inspiration and mournful winds but the high places summoned me from the first day I can remember registering the skyline of my infancy. Every day, when the curtains were pulled, I saw east to west, Foel Fras to Yr Wyddfa and I was drawn like an iron filing to a magnet. I could draw that skyline blindfold. Put it this way – if I was on Llanddwyn beach on a glorious day, I would love every second, walking, swimming, soaking the sun – but I would look across to the mountains and wish I was on yr Eifl, or Moel Eilio or Elidir. And if I was on Moel Hebog, would I wish I was on the beach at Morfa Bychan? No, not until the the business of the high places was done. At the mountain gate, I stop and take stock. 40 minutes have passed, consciousness gradually gathered, eyes on the ground in the half light but now the Nantlle hills, Hebog and Moel Lefn, Moel yr Ogof are all slowly revealed as the sun does its job. There have been many days, so many days, when the mysterious shifting vapours or just the downright murk, conspired to conceal these scenes. Today, there will be no struggle with the elements, no foraging in the cloud-breaks for glimpse-scraps of the view. Today, the feast will be sumptuous and served fulsomely, without interruption, consumed by the few, delivered by the late October sun. 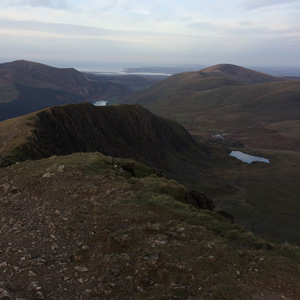 It’s still morning-cold as I pass the ruins where opportunists in tall hats, no doubt winked at by the guides, sold tea and lemonade to their privileged Victorian clientele and assured them that the top was “not far” and that an extra Welsh cake would guarantee the precise stamina required for the “final push”. Predictably tame sheep regard me with bored contempt as I remove my gloves to delve for a fruit pastille and a swig of water. The four lakes come into view on my left, the summit too, sporting the latest of its concrete carbuncles, now looms but there is still much to do. I imagine those 19th Century seekers of spiritual communion, groaning at the sight of the real mountain and cursing the conspiracy of the smiling tea-stall yokels whose earnest rural innocence was as disingenuous as their own benevolent superiority.

On Llechog, on a clear day, the whole task is plain. From here to Bwlch Main is a steady pull above the steepling buttresses of Cwm Clogwyn, including a skimming traverse where in winter, when scale is lost against the blank snow, you might as well be in the Alps, until your efforts reveal the appearance of Cwm Tregalan, which takes away the breath as surely as might Niagara or a first sight of the Great Pyramid. Those who scale Yr Wyddfa from the east on a day such as this, shall have awe as their constant companion – a surfeit of awe, even – so that accustomed to such consuming, overwhelming grandeur, they might find the sight of Anglesey and Pen Llyn (and County Wicklow) as somehow soft and easy. From the West, from Rhyd Ddu, regular appraisals of those Western sights feed the soul and then comes Cwm Clogwyn and Cwm Tregalan and then, like nothing else, Cwm Dyli, in its jagged horseshoe and the Glyderau, Carneddau… everything, in fact… the full nine yards. 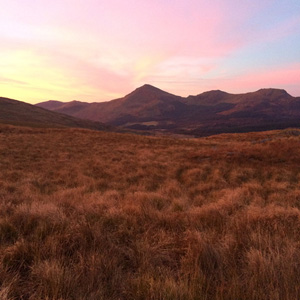 And so here I am crossing Bwlch Main, giddy with it all. I have not seen a single human since I drove through Beddgelert and as I pick my way across the airy (rather than hairy) ridge, the sun climbs and my boots break the ice on the frozen puddles. I always do this final slog too quickly, perhaps a little too keen to claim the top on my own. I always do (claim it first) but I always breathe hard as I pass the hideous cafe. If I was the king of Gwynedd (and my family go back a long, long way in these parts) I’d decree that it was to be taken down and rebuilt in London, in Hyde Park… and see how they like it. The railway would be relocated to travel from Llanberis to Beddgelert and Caernarfon and Yr Wyddfa could rightfully be the greatest of them all. Until I’m king, the top will never come close to rivalling the sheer bleak majesty of Carnedd Llywelyn.

I sit on the trig point on my own. This place, where tourists queue and bill and coo about the view will be mine alone for 15 minutes. One figure is heading across from Carnedd Ugain and a blue coat is nearly at the top of the zigzags. When they arrive, a young Scotsman based in Leicester and a young English woman studying at Bangor University, we chat as though we are old friends. We have caught the sumptuous fat glorious worm that made its pyramid cast on the highest point in all England, Wales and Ireland, on a crisp sunny morning. The Scotsman is unequivocal. He loves the Highlands – they are in his blood – but Eryri is magic and he cannot resist it. She, from Manchester has stared at these mountains on every childhood Anglesey holiday and wished herself on them. The freedom is now hers to enjoy. After half an hour, it’s time to go. Dots are appearing below and the rails begin to sing. 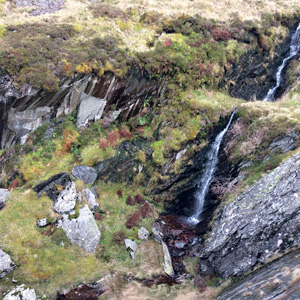 We say farewell. We will never meet again but we saw what we saw and for a speck of history it transcended everything. I half skip and half jog my way back to Bwlch Main, the ice is visibly thawing as the sun climbs over Lliwedd’s shoulder. I am captivated. I kept straight ahead ignoring the traverse above Cwm Clogwyn and turn left, hugging the edge of the South Ridge, the ridge where I never see a soul and where I must keep stopping to peer down the gullies of Allt Maenderyn and watch the ravens soar. At Bwlch Cwm y Llan, there is a tunnel that leads to a great hole in the ground. The hole hosts a hanging garden of flora that is as vivid as it is incongruous on the side of these sheep-chewed slopes. Turning right onto the broad track back to Rhyd Ddu, more vertiginous gardens are passed and then the eye wanders over to Moel Hebog. I haven’t been there for a while, I think – maybe one evening – after they’ve all gone.

Just after I complete the circle and rejoin the Wyddfa path, I am swimming against the tide. I attract odd looks from people who are wearing so much gear, they’ll be roasting before they meet the ghosts of the lemonade sellers. Save your gear for when you’re cold, I want to say but I smile when they say I’m an early bird and I perform mental calculations of how much they spent on all that brand new, branded stuff. During the last half mile to the car, it’s reached at least twenty grand. In half an hour I’m back at the farm, showered and devouring a huge Welsh breakfast. It’s not quite 11am.