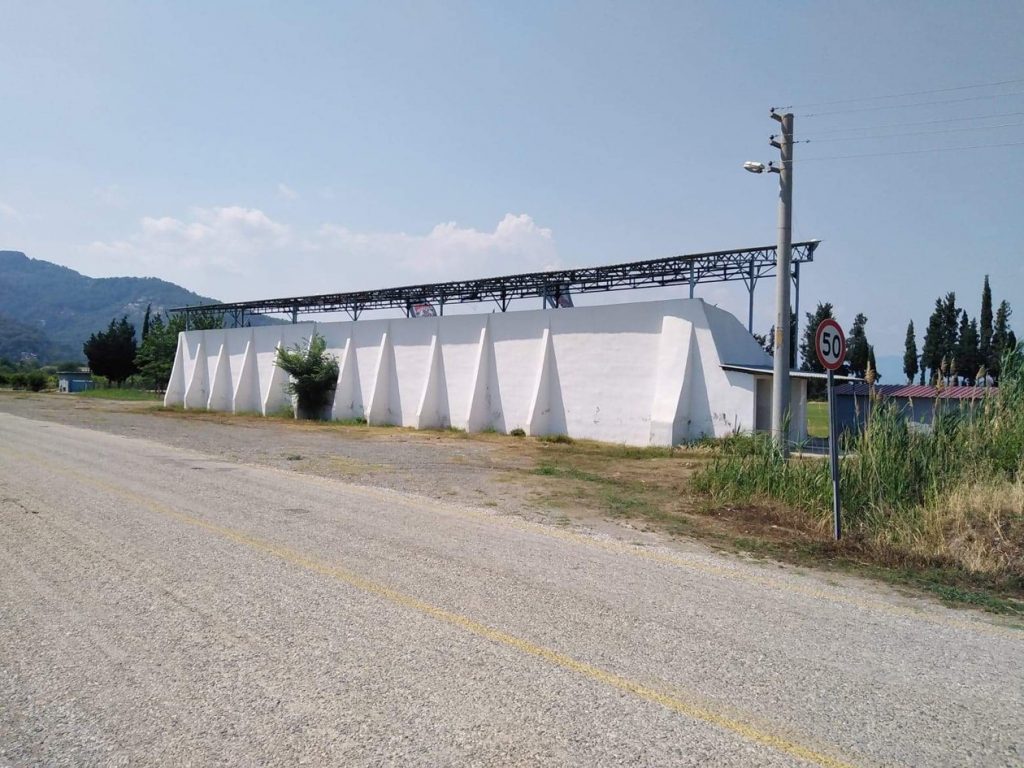 On a long straight dusty road on the edge of Dalyan, there’s a football ground. There’s a white concrete stand littered with dozens of discarded plastic water bottles that has bench seats for about five hundred spectators. The coarse grass in the goalmouth is long because it’s the close-season, although the corner-flags are still out and the goalposts still in position. Behind the stadium there are acres of pomegranate groves; in front, scrubland and a large buttress of rock. The whole place needs a good tidy-up. Do the volunteers who maintain it have a strimmer, or do they hire one from the shop in town? Are they many or few? When it’s time to do some painting or repairing, do they phone around? And when they’ve done that, is it always the usual suspects who give up their time to do what they can to keep the football dreams of their children alive?

I walked across the field. There were some plastic discs laid out as if for training. The grass was growing through them. The Mercury nudged 30C. I went there because it was match day and I couldn’t go to the Cardiff City Stadium. I was at the Austria game but world events and overdue Turkish holidays meant that the best laid plans – like everyone else’s – were thrown to the wind – or rather, in my case, to a hot breeze from the Mediterranean. I’d decided to alleviate the pre-match nerves by going for a long, searingly hot walk – it’s the other thing bucket hats are for – reasoning that it would delay the start of the inevitable sesh. I’d followed my nose and that’s when I found it. 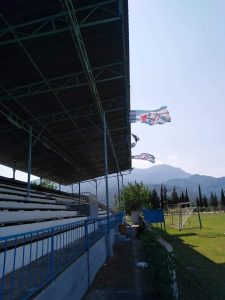 Over the course of the last season, I’ve been to many outposts in Wales that are not dissimilar; places that can look unloved or are in need of improvement, but are the seeding grounds for generations of footballers. And fans. And hopes.

When I left Dalyan’s ramshackle ground, I felt better. I felt more ‘part’ of the game and I started to think about the fans converging on the CCC; the conversations, the spontaneous chants, the checking of phones and watches, social media posts imploring anyone with a spare to get in touch, the rounding up of stragglers – smiles on faces, suppressing as well as possible the inexorable aching tension.
I continued my walk. Turkish flags fluttered from the clusters of boats on the river. An old man pushing what looked like an even older bicycle nodded approvingly at my sweat-drenched red dragon t-shirt. “Merhaba” he said, and so did I. A retired riverboat captain perhaps? With a deeply lined weatherbeaten face into which were set twinkling green eyes, he was, I speculated, around eighty years of age. He was sixteen. Then. In the little lane that passes the pet-supplies centre, there was an ancient red Massey Ferguson 35 tractor parked next to a crumbling wall. A model you will see pretty much all over the world, the first ones rolled off the American production line in 1955. The following year, the first British made versions were launched. I used to drive one. It was made in 1958.

Hours later, in a Turkish bar, with the TV sound turned down, after the pouring of the sweat, came the cascade of emotion. I did not believe it until the last ten seconds. I had counted down from one hundred and twenty. The ball was in their half. My mind was desperately trying to work out how long it would take in seconds for it to be launched towards the penalty spot…

And then a single sound that began in the lungs of a man called Antonio Mateu Lahoz became the wild roar of three million voices expelling sixty four years of anguish. A man from Llanrwst appeared from nowhere and told me he never cried at anything, but that he’d wept uncontrollably when the whistle blew. I doubted his was a unique experience. I am of a similar disposition but him relating his tale almost made me start again. I had an Adana kebab for dinner. It was the best I have ever tasted.

We are in the World Cup Finals. The World Cup Finals. Let that suffuse… I have watched them all since Mexico 70. I’ve collected the cards and the coins, pretended to be Jairzinho, and filled in the wall charts. If I’m honest, I became inured to the disappointments of not qualifying – the mission impossible groups and the near misses, the rattled crossbars, the cheating hands – I just used to wonder each time the qualifiers were drawn what new agonies the fates would concoct to stop us getting there. We’ve always had great players, but that, as has been proven so often, guarantees nothing. 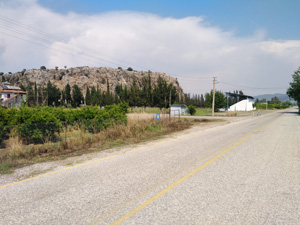 And now we’re there. We’re there because foundations were put in place upon which to build a  proper football structure. To the architects of that, as well as to the class, skill and guts of the players, we should offer up thanks. When the last light flickers on the careers of our current ‘greats’ there will be no void. Perhaps we’ve already seen the first lights of the next ones? The ‘redprint’ for sustainability is there.
Eight million quid. Or more. That’s what Wales’ participation in the World Cup is worth at the very least. And who knows how far we can go? There are no easy games for us… and none for our Group opponents (whatever any of their hubristic media might crowingly suggest).
Turkey failed to qualify, but the raggedy flags of Dalyan FC will still flutter, the volunteers will still cut the grass, the kids will still dream, old men will shake their heads at bad first-touches, and the game will hang on by the fingernails of the few. The FAW has a huge opportunity here. I hope they take it.

The game was done. The sesh ended at 4am local time. I didn’t stagger back. I floated ten feet above the hot, dry road. The following night I took my time and luxuriated in the joy of pure celebration. No release of tension, just the sunken-in awareness that this awesome (a carefully chosen term) group of players and coaches, had delivered unto us something truly special.

On Wednesday, against The Netherlands, anyone in Wales could have been forgiven for being, shall we say, relaxed. A Nations Cup encounter after such a stunning piece of history-making might not have stirred the soul to quite the same extent, but on a silent TV in a bar just down the road from Dalyan FC, I watched anyway. It was a decent watch as well. We retrieved and surrendered the game in injury time, and I know that Rob Page and the players will be kicking themselves. Just as in defeat to Poland before that monumental effort against Ukraine, the young players banked some experience, played some decent football and began the writing of the next chapter of a journey that I didn’t ever foresee when I took my plastic football out into the street and commentated out loud on the imaginary goals I scored at the World Cup Finals against our garden wall.