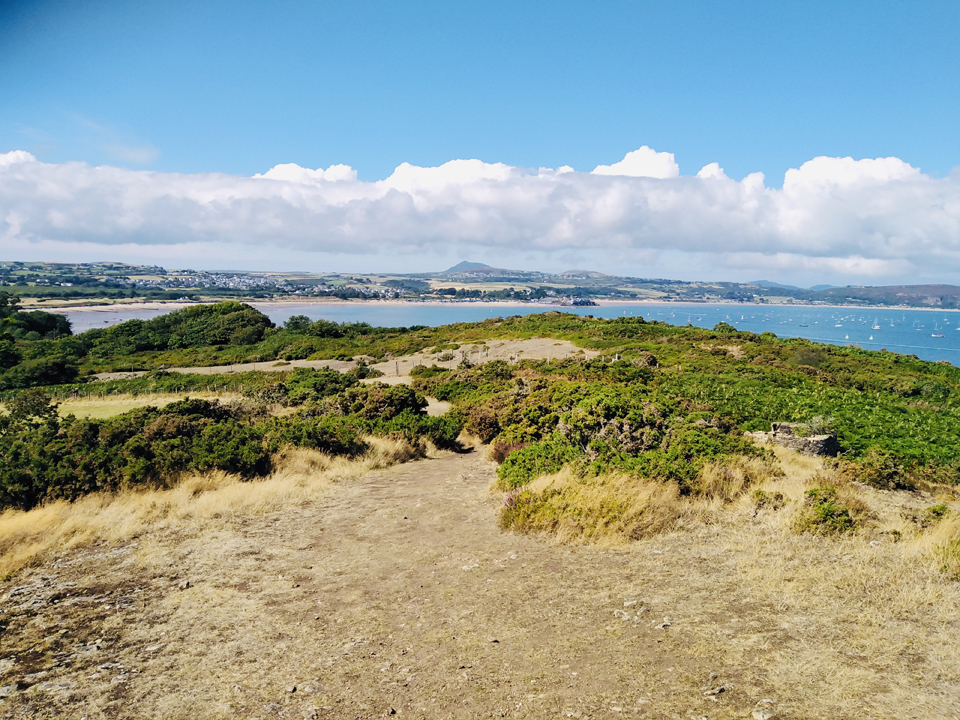 In the foreground, a small boy encouraged by his Dad, is engrossed in a careful probing of the rock pools. Porth Neigl, Hell’s Mouth, yawns into the haze beneath Mynydd Rhiw. The lead mine chimney above Llanengan encourages a Poldark double-take, and Enlli draws the eye as it always does… as it always will. The path to Mynydd Cilan is adjacent to the sort of cliffs that, without the presence of that wire fence, would be considered a little on the cavalier side. Rugs of summer-flowering heather decorate the carpet of coarse grass and gorse, a man with a sheepdog prods the ground with ornately-handled walking sticks, and a little fishing boat has the sea to itself.

This is the West, where farmsteads and random cottages crouch beneath the perpetual breeze… or wind… or gale… or maelstrom. Benign to battered overnight. It’s no more than a flutter today, but it never lets up, and tomorrow it’ll probably be blowing a hoolie. Around the corner from Cilan, Porth Ceiriad hosts those in the know. The powered maritime hardware of the Cheshire Set is abundant. Yachts laze, dinghies bob, launches bustle, powerboats flex, and jet ski riders track up and down, crying out for attention. I wonder if their fellow seafarers, relaxing in the warm sunshine, in the shelter of the hidden bay, appreciate their racket. Never got jet skiing. They describe figures of eight before roaring off in straight lines… and then doing it again… and again. Lots of flourishing at the end – look at that plume of spume!

At Trwyn yr Wylfa, I leave them behind and tread the narrow path towards Machroes and my ultimate doom – to hurry through Abersoch as quickly as possible. I startle a couple by saying hello. They’re the first people I’ve actually passed face to face in the last five miles or so. They respond with a flustered acknowledgement, shocked, it seems, by the inconvenience of the prompt. I don’t say hello to everyone everywhere, but on an empty stretch of path with no-one else in sight, it’s an involuntary thing. I make a mental note to temper my impertinent behaviour, and descend to Porth Tocyn.

And then I’m on the last leg. Past the discreet, wildly expensive properties; past purse-lipped mother and daughter, dressed for Amalfi, faces like thunder; past brand new wobbly bicyclists and upturned boats in gardens that will never see salt water action. The decision to avoid the beach and instead take the path across the golf course, proves worthwhile. Two well-attired golfers are discussing the run of the sunburnt fairways. They stand at the tee, agreed that you’d expect said fairways to be much quicker, but that actually, they’re holding more than you’d think. Club selection is so important… On the pretext of stopping for a drink of water, I perch on a large rock nearby and watch. A teenager on a bike races down the track, disturbing the first golfer’s address. He steps away and shakes out the tension before retaking his stance. A very short backlift (in my judgement) precedes the striking of a ball that disappears very sharply to the left onto an adjacent fairway. His companion offers consolation before himself taking aim. This time the swing is more expansive but no more effective. Never really leaving the ground, the ball bounces down the fairway into a “bloody” bunker, and the two set off in markedly different directions to salvage their holes…

In Abersoch, sulking children in branded clothing are denied ice creams. Surly barrel-chested men flick through racks of wetsuits. A lapdog produces a remarkable scattering of faeces across the pavement, and I dawdle, daring its (now) shifty-looking owner to not pick it up. Jo arrives to pick me up from our designated rendezvous just as an amphibious craft is driven nonchalantly from the beach, ready, presumably, to process around the one-way system like some kind of weird carnival float.

If the price of walking the Wales coast path from Porth Neigl to Porth Tocyn is to hurry through Abersoch at the end, then so be it. Next time, I shall do it in the dead of winter, when I’ll likely need an ornately-handled walking stick and a strapped hat.