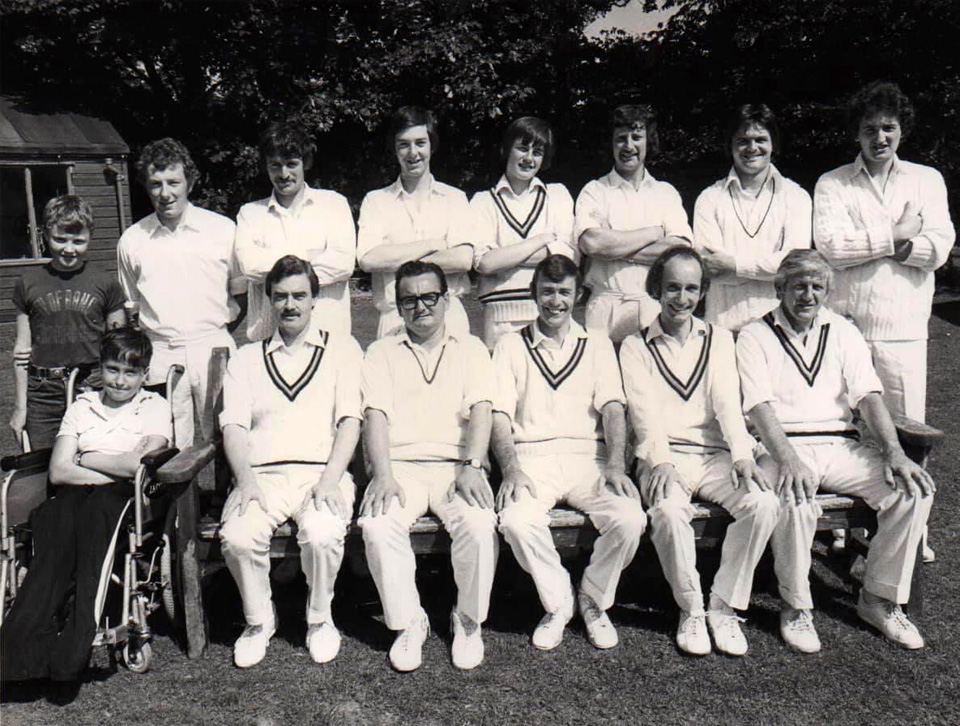 It was the summer of 1979 and it was a very hot Saturday afternoon in North Wales. My Dad, Tommy Glyn, had a brown Audi 80, and we were on our way to Halkyn to play cricket for Bangor seconds. He had recently stepped down from the first team at Bangor, after a career that had confirmed his status as a top player in the region’s cricket history. He was capped by Wales, and in his home city, was part of a team that included John Cowell, Gordon Williams and Anthony Jones – all of whom, it has been said, could have ‘made the grade’. Gordon’s son Richard would have been playing for Northants as we made our way to Halkyn that day. I was fifteen or sixteen and progressing well. I would never tear up any large cricketing trees, but within a year or two I was a regular in the Firsts and had broken into the Caernarfonshire side. It was my Dad’s last full season playing cricket before he took up annual football coaching duties in America. At the time, that season in the seconds was great fun – looking back, it was part of an absolutely priceless experience that helped shape not just my cricket, but my growing up.

Our passenger that day was opening bowler Kevin Charlton. Kevin, better known as a goalkeeper, had recently joined Bangor City, and earlier that year had faced Liverpool between the sticks. That was the game in the snow when the football league programme was frozen off, and a full strength Reds side turned up on the North Wales Riviera expecting a workout in temperate climes. The pitch – under the snow – was pretty good to be fair. Dalglish scored twice…

Kevin was a brilliant keeper. He wasn’t the tallest, but he was spring-loaded. Agile, quick and very fit, he was a professional with Hereford before coming to Bangor, and went on to join AFC Telford where he enjoyed great success. Like most good footballers, he could turn his hand to any sport, so whilst not technically a brilliant cricketer, he was a very effective second team bowler, and his hand-eye coordination meant he could hit the ball hard. His running between the wickets was frightening and he was one of the finest fielders I’ve seen at any level. Above all, Kevin was a lovely bloke. His irrepressible sense of humour never overstepped the mark, but you had to be on your guard. With Kevin, there was always a laugh to be had somewhere…

Halkyn’s ground, in my mind’s eye, had a great view of the Dee Estuary. It sits above the North Wales Expressway, although in those days, that didn’t exist in its current form. We visited a number of attractive places in that season – the grounds at Dolgellau, Conwy and Bersham were memorable as much for their settings as for the games where Tommy Glyn amassed a final glut of runs. On this particular day, The Wirral and Liverpool sprawled away to the horizon beneath a shimmering heat haze, and the pungent smell of suncream and feet permeated the changing room.

Halkyn batted first and were decent. As I recall, it was good competitive cricket played under a hot sun. Kevin was charging in from one end. His was an aggressive approach. He accelerated through a long run-up, and took a mighty leap at the crease, before delivering reasonably accurate medium pace bowling. His bustling attitude, I’m sure, added a yard of pace in the batsmen’s minds. By around three-thirty he was red of face, still with a spring in his step, and showing no inclination to be taken off – there were no restrictions then on the amount of overs that a bowler could bowl in a league game. I’m not sure who had removed one of Halkyn’s openers but, as is the way in Division 4 cricket, said number one or two was now standing as umpire at Kevin’s end. More than halfway through the innings, with the game nicely balanced, a series of events took place that etched themselves in my memory forever.

A new batsmen was at the crease and facing Kevin for the first time. Skipper, Colin Ishmael brought my Dad in to first slip and motioned me to move in a few yards closer at mid-off. He wanted to make the batsmen think a little. Not unreasonable. The first ball of the over was a beauty. Playing back on a decent pitch to a good-length ball, the batsman was hit on the pads, bang in front of the stumps. It was what the leg-before-wicket rule was invented for. The ball was virtually lodged, shin-high, between a pair of squared-up pads that perfectly covered all three stumps. Not shy of appealing, and in the full knowledge that he’d broken through, Kevin turned from his follow-through, leapt once more into the air in a half-turn and screamed at the umpire:

I looked to my immediate right expecting to see the finger go up, but the umpire remained unmoved. Kevin looked at him incredulously.

By now the ball had been retrieved and thrown to me. I walked back with Kevin to his mark, polishing the ball as he shook his head and sweated profusely. I lobbed him the cherry and he plucked it out of the air with a downward snap of his arm. He looked at me with his top teeth tight on his bottom lip, forming the letter F. As I jogged back in the direction of a shortish mid-off, he came tearing past. When he reached the white lines, he seemed to leap a little bit higher, and the grunt that accompanied the delivery seemed a little bit louder. This time it was a short ball outside off stump. There was no particular pace in the pitch but the delivery managed to acquire a little more bounce. With his bat well away from his body, the batsman had a waft. The snick was audible to keeper, slip, bowler, and probably whoever was filling the tea-urn in the pavilion. A clean catch, ball thrown in the air. We went up to a man. Again:

Fielders ran in to congratulate the triumphant bowler, but the batsman, who we’d expected to see doing the decent thing and tucking his bat under his arm, remained. The umpire was unmoved.

A silence descended over the ground. I looked at my Dad who was suppressing a smile. Kevin’s eyes were on fire, the veins in his neck were bulging. He leaned forward, hands on knees, looking up at the batsman. I had the ball. Ignoring the umpire, the bowler stamped his way back to a spot five yards beyond his already extensive run-up. If he’d pawed the ground with his spikes before launching himself towards the square, I wouldn’t have been surprised. I offered commiserations but he didn’t hear.

The sun was at its hottest. The day had become a little airless. There was no breeze. At least there was no breeze until Kevin ran past me. A split-second before the ball left his hand, I knew what would happen. My Dad, at first slip, knew as well. There was only one thing that could happen. Kevin Charlton bowled the fastest ball he’d ever bowled in his life. It was straight, it was a Yorker, and it flattened the middle stump. If he saw it at all, the batsman didn’t register. He merely stood, rooted to the spot like an infant playing French Cricket. The bails flew, and in his unrestrained joy, Kevin, arm raised, finger pointing skyward, turned to the umpire and screamed, drawing out the words:

Colin, tried to calm the situation. The umpire had taken exception and was trying to warn Bangor City’s goalkeeper about his conduct on a cricket field. My Dad had covered his face with one hand and was laughing so hard that his body was practically convulsing. We mobbed Kevin, as much to steer him away from trouble as to celebrate, and savour the fact that justice had been done. The umpire harrumphed and wore his offence like a badge. To avoid any further shenanigans, he was ‘relieved’ on the basis that he had stood for long enough. Kevin, intoxicated by the moment, wanted to offer him a few more choice words as he stalked off, but was dissuaded on the basis that it might lead to sanction.

Halkyn posted 140-something for 7 or 8. Tea was a relatively quiet affair, both sides presumably choosing to leave the ‘difficulties’ out on the field.

Having toiled in the sun, it was time to bat. Kevin was able to put his feet up, confident that he wouldn’t be required. With the benefit of a great deal of cricket hindsight, if I’d been skipper, I think I’d have sent him in at three just to see what happened. As it was, Tommy Glyn set about the bowling with relish. When the second wicket fell with decent runs on the board, Colin promoted me up the order from number six and thus I was granted the opportunity to experience one of the most treasured hours of my life, let alone my sporting career. We needed something near forty runs to win and my Dad had amassed about eighty. As I arrived at the wicket, all he said was:

“Play every ball on its merit and make sure you’re still here at the end.”

I let him call every run. The strike came my way and I’d followed instructions and savoured every single second of being out there. Now in sight of the winning runs, he was in the nineties, and I’d got twenty or so. A new over was about to start with me facing. The scoreboard only displayed the total, wickets and overs, but a signal from the boundary suggested that Tommy Glyn needed two more for a ton. I walked down the pitch to ask what he wanted me to do. He repeated:

“Play every ball on its merit and make sure you’re still here at the end.”

I’ve always had a decent cover-drive in my locker. My Dad said it was a better shot than his… more stylish… better timed. I’m not so sure – but I’ll take it. When you’re batting well, you don’t really think about it. It just happens. I had the measure of the bowling. A teenager batting with his Dad, who’s on ninety-eight. And there it was. A wide half-volley that I drove past extra-cover for four. That walk from the middle remains one of the proudest moments of my life. The two of us, taking the applause, him making me go first through the players. As he took his pads off in the changing room, he winked at me and said:

We broke down outside a pub on the way home. Vorsprung Durch Technik indeed.
Perversely, it was the perfect end to the day. An unlikely triumvirate, we celebrated the victory whilst we waited for the AA. Getting up to get another round in, my Dad gathered our glasses, looked at Kevin and, shaking his head in schoolmasterly fashion, muttered quietly in mock disparagement:

“How was fucking that that then?”

And we laughed until it hurt, all over again.