The clock sits on its third shelf at the back of my lean-to. It is not allowed in the house. It acquired woodworm some time ago when it sat on its second. When it moved house the first time, it lost its innards. They had long since ceased to assist in its keeping accurate time, suggesting they were just average clock-innards. The vital organs of the clock were replaced by a small battery-driven circuit, that for a period, propelled the hands. In the end, when the display in the corner of the television or the digital watch rendered irrelevant the clock’s contribution to the monitoring of time’s flow, the battery leaked, the circuitry failed and the hands, like those of a reverently reposed corpse, were set at midday. I retrieved the clock thus. When the woodworm have drilled and powdered their way through its walnut-look shell, I shall discard it and preserve only the matchbox-sized brass square that betrays its origins.

The clock was presented to Thomas Henry in 1950 by his co-workers at the General Post Office in Bangor in commemoration of his dedicated service. Forty five years before that, as an apprentice splitter-and-dresser of slates at The Penrhyn Quarry in Bethesda he was presented with a cup. Polished up, it could have passed as silver. It wasn’t. The quarry was in decline by then, although the idea that Lord Penrhyn would have authorised silver for an apprentice is perhaps a little fanciful… even in his best times. That was a man whose pitiless priorities extended in simple terms to two things that might be described (maybe jarringly) as turf and serf. Certainly his land acquisitions in that region would attest as much. Thomas Henry won the cup for being the best apprentice, he was presented with his clock for long service and twenty-six years later, he took his leave of the Pennants, The Army, The Post Office and his chair in front of the fire. When Kate, his quiet, serious, poised wife died in the same year, the keys to the house in Orme Rd were handed back to the landlord. The collection of small black rent-books, neatly kept up to date in longhand, showed no breaks. For eighty six years Thomas Henry Jones owned nothing of significance save his clothes, his tools and his self respect. The horse was his father’s – the butcher’s – the motorbike was first the army’s and then the property of the GPO. He never owed a soul a penny and he left the world better for his place in it – but no richer or poorer.

During his time at The GPO, a talented man, he was frequently approached by those doyens of secret self-interest, the freemasons, to join them in their cabal of favour and self-promotion. It was made clear that there would be no rise through the ranks without the move to handshakes and shirts-off ritual. There was no rise. Here was a man who had lived on his wits in Mesopotamia, advised by the local tribesmen to boil onions and drink the stock in order to maintain his health in the searing, fly-blown deserts outside Basra. Unsurprisingly, his campaign in what we now call Iraq led him to draw conclusions about life that were not wholly compatible with greed, profiting at the expense of others and the sacrifice of principle at the first appearance of an extra few quid. So he remained as he was, a worker, until time was called and then continued on a walnut-look clock.

They never owned him. He split their slates but before that, he held the horses head as his older brother took whatever the family butcher’s business could afford to the starving families of the locked out quarrymen. He trained in Tring and carried despatches in Persia. He was a private but the commander’s horse obeyed him and not its master. He was unafraid and kind. The horse, happily, was unable to identify privilege or salute the rank that comes with an accident of birth. He went to India, not to travel, for then, there were no gap years for the poor (as there are none now) but to convalesce… and perhaps for irony’s sake alone, many of his cohort succumbed to cholera a little further east. They never owned him. He lodged at Kate’s father’s house in Porthmadog, a roving engineer and events took their course. He and she had two children and he took her back to Tregarth – he took her widower father as well. He laid cables and jointed cables and he sang and acted and played football for Tregarth Celts and then Bangor Athletic and had two more boys, Citizens, who both wore the blue shirt. They never owned him. They tried but the luck of his life was to be born and kept free of the idea that somehow, the things you acquired in some way define you during the time that the clock ticks you back whence you came.

When the National Trust took possession of Penrhyn Castle, and the last of the Pennants wielded no more power than a chip paper blowing down Beach Road, it was suggested to Thomas Henry that he might care to view the insides of the mighty empire fallen. He declined, declaring that he had no need to be reminded of the chattels and grand ‘living’ for which men (little more than slaves) were daily broken. So far as he was concerned I would venture, the innards of Penrhyn Castle could rot as easily as those of a faux nut-wood clock. In his late years, he dispensed to me appealing wisdoms through the fables he made up around the characters of his youth. Those scrumpers and trespassers; transgressors against the estate who bathed on the private beach and re-positioned the golf balls of the gentry; who paid no heed to the river bailiffs and dined on salmon spitted over stick fires in apocryphal woods by the Ogwen… as if anyone could ‘own’ the river… as if anyone could ‘own’ someone else’s right to eat a fish.

And so when I take the clothes from the drier, or search for slug pellets, or a spade or a picture hook, I look squarely at the clock on the shelf and smile at the thought that its owner stood there in the dark next to my bed and soft-voiced, sowed the seeds of question, of non-conformity and the resolute understanding that nothing should be accepted at face value, no-one is born better or worse and that the ties that bind us through love and understanding cannot be bought or sold. I was reminded by one of my cousins (another of his grandchildren) not long ago when he visited the ‘old country’ from Toronto, that it is not surprising that the entire Atlantic Ocean has done little to dilute the principles we share.

The clock is as worthless as it is priceless. 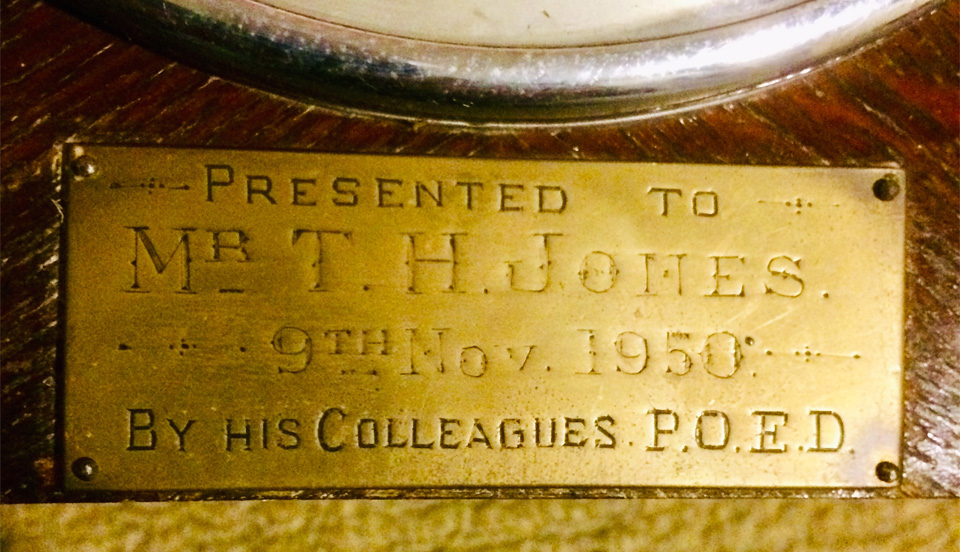