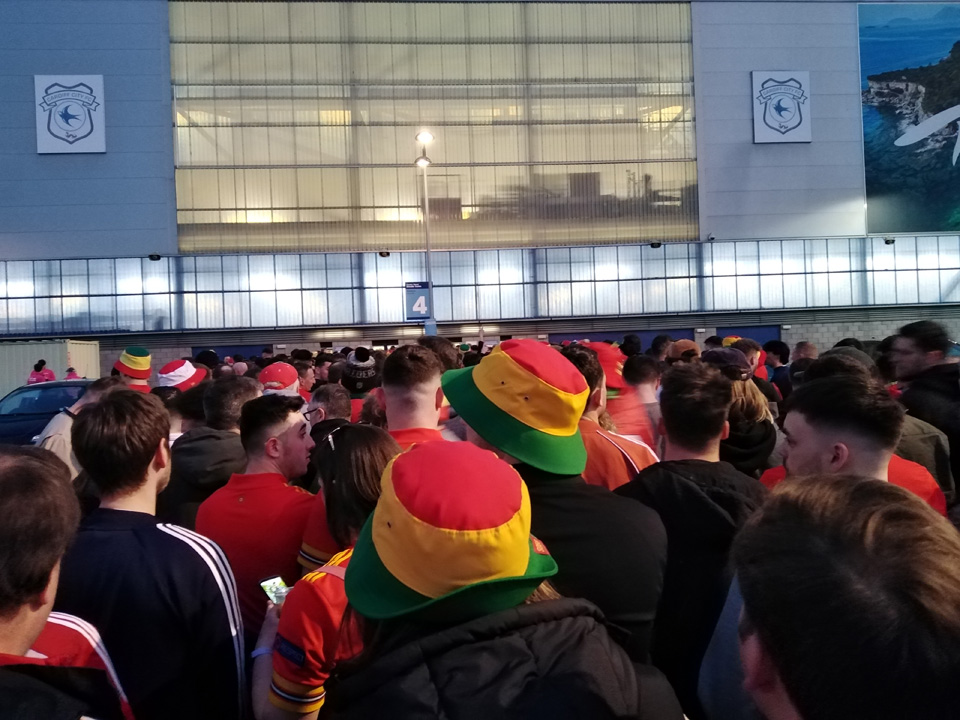 The Kindness of Strangers: The Company of Friends

It must have been when I crossed the road by Metal Street. Had to jog. Motorist hadn’t applied the new Highway Code directives. That lengthening of the stride probably put pressure at the top of the slightly parted zip. A woman sits on the Tin Street pavement shouting. Feet in the road. Lost in a world of mind-alteration, obscenities and gravelly-voiced what-you-looking at…

Spice girl. With no power. How did she get there? Makes me sad.

The sun is too bright to use a cash point on Queen Street. Salute Bevan.

This, before I’ve spoken a word.

They can’t have been expecting many at the City Arms. Two humans where two octopuses would have been a better bet. It’s probably just as well in terms of keeping things steady. It’s three-fifteen.

I have no ticket.

Drinking Spanish lager, outside in the sun, in Cardiff, with moiderers, is always to be embraced, but I haven’t got a ticket. And they have. So amidst the animated speculation, the misty-eyed recollection and the excited apprehension, there are pangs.

Then there are three lads next to us, and Brian leans across and asks the question. Dai Rees. Diolch.

I have a ticket.

No pangs, but son number one, now on his way past Unsporty Spice, has not.

The phone buzzes in my pocket. Sam arrives. Good news and bad news. He hides his disappointment well. Check the phone. Phil says phone this bloke in London. The bloke can’t come.

Sam has a ticket.

The kindness of strangers; this football family of Wales has taken it upon itself to look after and nurture its own and become something that as long as we live and breathe, will confer upon us that most precious commodity – a real community. And the memories. It would be so easy for the die-hards, the Ninian Racecourse, Home International, where-we-you-when-it-wasn’t a thing?, to dig in and claim an exclusive birthright, but to build and sustain a culture, you need to embrace everyone, and the fresh-faced lads sit with old stagers, and quaff and jest and learn. These days in the sun; the flag on the multi-story wall; the shirt on the mural. My shirt, my Cymru.

From the Head of Steam where we built… well… a head of steam, we edge to the ground. The brick walls of the perpendicular housing blocks that line the route are stained with Turner-Prize arches of piss-silhouettes. When conspicuous consumption has to go, it has to go. I once went to Vienna to watch Wales. Brian and I had earlier discussed the dark trees in the parkland around the Hans Krankl stadium, where the police turned a blind eye and the relief was immense.

The concourse is in tumult. It’s not so much a buzz as an insane, thunderous cacophony of unshakeable belief. Jesus. I hurry through the miasma of hot, shouted breath to stand by my seat. It will not be moved from its retracted position for the period of my occupancy.

Dafydd Iwan. Where is he? He’s singing and I’m listening; everyone’s singing, I’m now singing, but I’m still scoping out the touchlines. Where is he? He’s on the screen, but where is he? I give up and sing. I’m here. I still don’t know where Dafydd Iwan is, but we’ve moved on, and when the teams take to the field, it’s not so much ‘going up a notch’ as ‘re-calibrating the scale’. The CCS has become an infinity pool of noise…

Austria have already hit the bar. It doesn’t seem to register with the crowd. The songs just keep coming. They could probably have scored and no-one would have noticed. Their players would have celebrated and Wales would have kicked off again, but the crowd would’ve just steamrollered the whole thing as though nothing had happened.

The ticking of the clock.

One game away from the World Cup Finals in Qatar. In November and December.

And if we make it, I won’t be there; can’t be there. Those are giant steps; too far to stride for me.

In the Brewery Quarter, above a cold courtyard, two from Bangor and two sons sit with a last beer. Cardiff is shutting down. The Canton will have been swept, the concourses hosed and the car parks picked. The stains on the walls will have dried, wrappers and cartons will blow down Queen Street or slip down the Taff to lap the shores of the Bay. Night-gulls and fat pigeons eye spoils from roosts above Chippy Lane, the final hoarse Viva Gareth Bales echo from staggering stragglers and with one last flourish of our glasses, we toast the kindness of strangers.