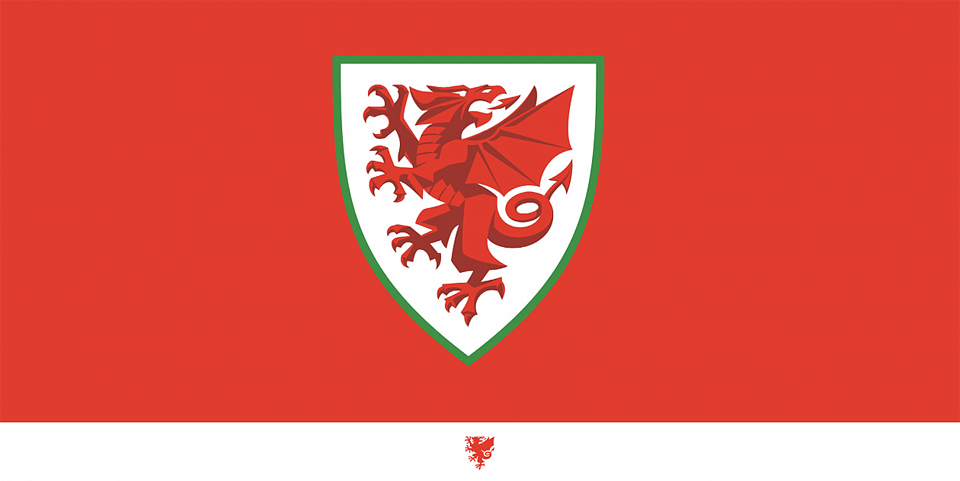 Leigh Delamare Services, fuel stop. Miscalculation. The petrol must have been delivered in person by an Emirati Prince. A tenner, then get some on the Newport Road in Cardiff. The old Honda’s been on some trips lately but this solo spin across the Bridge of the People of Wales (as I call it) has taken on far greater significance since the day I bought tickets for this – game of games.

On rocks in the Severn, cormorants are drying their wings… are doubters sharpening their knives? The mudflats, as ever, look stark and lonely. Even on hot summer days, you’d shiver down there. A van driver in front of me blows plumes of fruity smoke out of his window, the flavours of which are strong enough to make it into the Civic cockpit. My mind wanders and imagines the thoughts of his lungs. “Christ” they’re saying, “what the hell is this?” Thirty years of tar and then he goes all craft fags… ”

Before the Bryn Glas tunnel, one of those signs that tells you things that you may or may not believe to be true about the road up ahead says, “Football, November 19 plan your journey” and I overtake the van and my mind’s eye plans Copenhagen, plans Rome, plans St Petersburg. If Ryan Giggs smoked, I bet he’d have a fag now. It’s four o clock. Let’s hope he’s having a cigar later. On Saturday I sat in a pub in Wycombe watching the Azerbaijan game with two Scots lads who had come in for their game earlier. They were drinking cider but made remarkable sense given the uncollected empties in front of them. They predicted a comfortable win for us, one of them had done two nil on his slip and a double with Scotland, so when I left, I hazard a guess they got stuck in to a few more jars.

Two memorable moments set this up. Kieffer Moore’s Toshack-esque header in Slovakia was one. The second was during the Croatia game in October. I stood in the front row of the Red Wall directly behind the goal. (Thanks Brian). At one nil to them, Wayne Hennessey pulled off a save from a glancing header. A strong hand and a remarkably agile dive kept us alive, before the force of nature that is Gareth Bale went up the far end and equalised. There are two footballers I watch who can just ‘will’ a goal and Bale is one. The other is Les Davies. Look him up.

Alun and I converge on Cardiff at 4.10pm. I’m in Adamstown, he’s in Splott and Sam is still in work. Musketeers, we text a two-word round robin. Tiny Rebel. There are new shirts everywhere. Spain, said some. Heads were shaken. And then, Owain Glyndŵr came the explanation and all was well. We drink slowly – is there something in the cortex or the medulla or wherever, driven by prayer and growing faith, that is programming the need to save some space for later? Later…

Sam joins us. He’d have been here sooner but he was waylaid by four lads who, after lifting him in the air and carrying him down Womanby Street, had grudgingly accepted that he was not in fact Joe Ledley and allowed him to go on his way.

At 6.30pm we enter The Prince of Wales. Frisked and patted. The pub that was a theatre. The upstairs bar is thinning out. Sion is on his way. The impressive array of fonts promises much and delivers little. No Blue Moon, no Shipyard, no Punk IPA. What have you got then? San Miguel. Ha! Should’ve bought the new shirt… The barman is unimpressed by my noting that the absence of beer at the bar is coincidental with the arrival of 35,000 punters. Sam, veteran barman of The Gatekeeper, informs me that the barman will think I’m a twat. I’m not fussed. It’s not his fault. It’s not mine either. Perhaps Tim Whateverhisnameis, the big Spoon man, has a policy on football nights. Assume they’re thugs, give them plastic glasses… 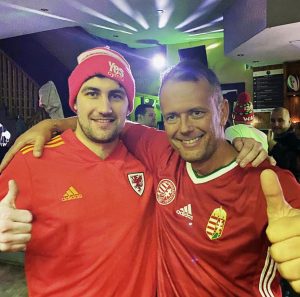 The taxi driver delivers four more Joneses to the Cardiff City Stadium via a circuitous but impressively effective route. The need to urinate, following the ill-considered decision to each down another drink in the six minutes before the taxi’s arrival, renders the queues frustrating but the atmosphere is, if not yet crackling, then certainly heavy in the last of autumn’s air. Once inside, the first sparks crack across the pitch. The Hungarian contingent are in fine voice. Alun is in the wall, Sion somewhere not far away – me and Sam sit high in the Ninian stand. The anthems. The Magyars deliver a stirring rendition and then we are given the eight note introduction before the PA falls silent.

To attempt to describe it is somewhat risky. To explain the impact on the human psyche of a tribe of 30,000 raising perhaps, not so much the roof, as the very sky above it, is difficult. Imagine passion as a physical entity, tuned by the wind and given voice by the angels of life and death and you’d still have something to find. Uplift? Affirmation? Emotion laid bare? Sport? What’s the point of that? I’ll tell you what… even Malcolm Allen would have been hard put to find the words for that.

When the singing subsides there is a quarter-second silence and as the players break away from the line, rituals performed, an invisible jet engine roars across the stadium. Even the valiant Hungarian fans, who will bark relentlessly from their corner like a pack of tied-up dogs for the whole game, allow the sonic boom to break over them. “Wales, Wales, Wales… ”

The game:
Allen to Bale to Ramsey. Davies to Moore to Ramsey. Calon Lân, Wales, Golf, Madrid. Allen. Hungarian flares (fireworks not trousers). Gwlad, gwlad. Allen. Unbelievable Jeff double Hennessey. Men of Harlech. Allen. Controlling this game now. Magyars on the ropes. Allen. With minutes to go, Wales have possession and with the exception of a few-thousand-and-eleven fatigued Hungarians, the entire stadium begins to clap. It’s as though no-one really knows what to do with themselves lest they collectively explode before the final whistle. So everyone just claps. Claps Joe Allen, claps the rest of the team, claps Speedo, claps Cookie, Osian and now, for it cannot be any other way, claps Ryan Giggs. And claps Joe Allen again. Stinging Welsh hands have come together at least five million times in this period of added time. Once each for every drink taken in joy or despair, for every mile travelled by the faithful, for every pixel on every television from here to the Baku of beyond that tells the tale of a football nation who share a collective belief in the very best this wonderful game has to offer.

Back at Tiny Rebel we drink our share of its unusual but oddly palatable concoctions and the night begins to slip unnoticed into the haze of tomorrow. Inevitably, the capital city of the north comes to us. Alwyn first and then Les Pegler, now en famille. He is a chieftain, a capitaine, an authority, the doyen of the Bangor football moidering galacticos. He went to France for a couple of games in 2016 and stayed for weeks. As the jars are quaffed, he could well be speaking French. In pubs up and down the land, the songs are being sung. Except here. When a number of fans in the bar are moved to strike up the familiar strains of “Don’t take me home… ” this offence prompts the black-clad doorman to dash, as though to extinguish a fire, to the chorus table. With a determined and serious expression, he throws his “no singing” wet blanket over the distinctly unthreatening, sociable tones and snuffs out that most Welsh of expressions. I wonder if he’s been waiting all night for this moment. Poised, cued-up, a Calvinist, coiled spring of enforcement. They shall not sing in Tiny Rebel. They shall not rebel. Who’d have thought? A rebel brand with a chapel mindset.

In Kiwis, we hug the last of the Hungarians we’ve been drinking with. Football people. No more, no less. Lurching back onto the street, we four go our separate ways. It’s been Wednesday for three hours now. Giggs is having a cigar. Jo Allen is having chips. It’s done. Yes Cymru.