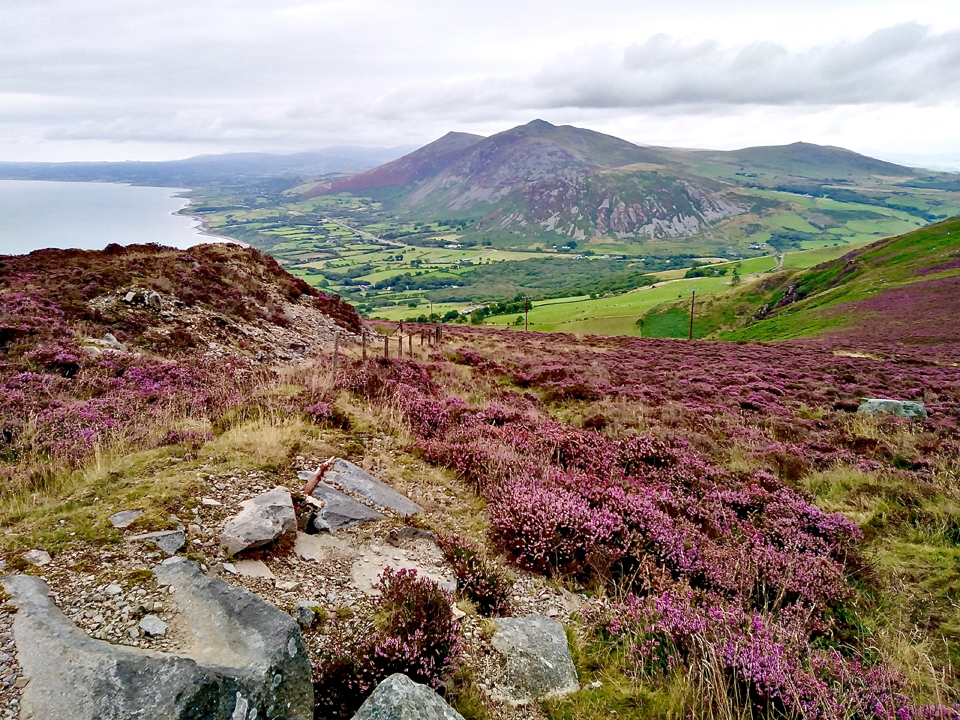 Yr Eifl – Sea Level and Back

On the rough path, a young man in a grey trackie, pushing a push-chair in which was seated a happy baby, stopped for a chat. He wanted to know if I was cold, wearing just a t-shirt and shorts. I assured him I’d be OK once I got going. He told me where the path was and asked how far I was going. I thanked him and said I’d probably go up to the top of Yr Eifl. Expressing surprise, the young man asked if I thought it would rain. I pointed into the wind. The brightness out to sea suggested I might be in luck. He concurred. How long did I think it would take me? Would it be dark? I said I’d be fine and he wished me well. The baby scrunched up its face, bored with the conversation, but the moment the wheels began to turn, he beamed. By the time his Dad got him home to Trefor, I bet he was fast asleep.

Cormorants and gulls stood in line on Ynys Bâch and Ynys Fawr, keeping their backs to me. I wondered what they were talking about. This was proper coastal path country. Cliffs, chaotic churning and frothing – are those stacks? Whitewashed cottages presented a romantic front, Trwyn y Gorlech impersonated somewhere in Ireland.

And then I turned inland.

The coastal path hereabouts is chalk and cheese; Jekyll and Hyde… actually it’s granite and heather. If you’re standing in the car park by the pier in Trefor, and you have designs on Yr Eifl, then if you factor in the ups and downs of the coast path, you’re looking at two thousand feet of uphill. Coastal outlier be damned, from this side you’ll know you’ve been on a proper toil.

I started on the serious uphill stuff, joining the Pilgrim’s Way above the village. If not quite head-down all the way to Bwlch yr Eifl, it wasn’t far off. There’s a roofless, derelict stone cottage halfway up which makes every fibre of your being want to live there. What else would you need? You’d just sit there out the front watching the light shift over Caernarfon Bay, and then scurry indoors when another squall hurled itself down past the quarry from the Bwlch. You’d need a roof, mind you… and a fire… but… ah, well… Onwards.

Twenty minutes later I was donning a layer at the summit of Yr Eifl. Three local lads were leaving as I arrived. We exchanged greetings. Two were ‘encouraging’ the third to hurry up before night fell. He rolled his eyes and smiled and looked knackered. He’d sleep well tonight. I could hear them laughing until they dropped off the top towards Tre’r Ceiri.

And then it was just me and the sublime. The breeze played tunes through the incongruous metal ‘sculpture’(?) that is embedded in the trig point; urgent, unearthly bleat-squeals rose from the sheep in Nant-y-Cwm; all Eryri to the east was pressed by a black sky, and Sir Fôn was a blurred line in the grey sea. The scrag-ends of maverick clouds, born in the west, wisped up and across from Nefyn, signalling my departure.

Back in Trefor, my knees rejoice at the prospect of merely operating the pedals of the car. A last crabber heads away from the pier, and a couple of solitary dog-walkers give me a knowing nod. It is 7.45pm, I left this place at 5.15pm. What a way to spend an evening.